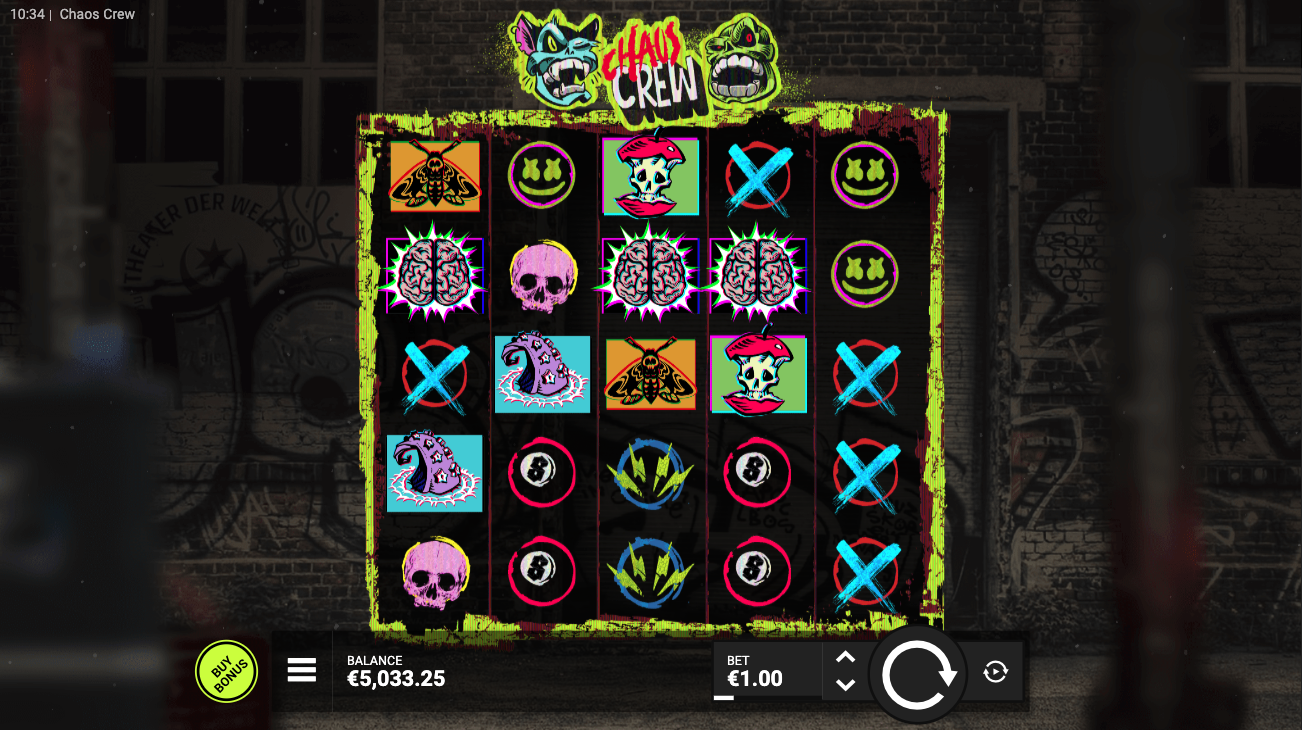 It’s a bit difficult to pin a theme on some online slot machines so with Chaos Crew we’re going to suggest something like ‘urban graffiti’; it’s a game developed by Relax Gaming/Hacksaw Gaming and from £0.20 per spin it offers players free spins and multiplier wilds in a grimy alleyway.

Chaos Crew is a five reel slot with five rows and fifteen fixed paylines; a high, graffiti-covered wall sets the scene behind those reels, perhaps one side of a disused factory building.

High value symbols include the 8 ball, the pink skull, the smiley face, the blue cross, the green lightning bolts, the moth, the brain, the apple core and the tentacle emerging from the water.

The Cranky Cat is wild and it will replace all standard symbols to help form winning combinations, applying a multiplier of up to 5x for any wins to which it contributes. More than one Cranky Cat on a payline will mean those multiplier values are multiplied together. The Free Spin! icon is the bonus symbol.

Landing at least three of the Free Spin! bonus symbols anywhere in view will kick this feature off and you’ll start with three spins on a set of reel which feature only the blank spaces shown below……

…..along with the Cranky Cat and the Sketchy Skull. Each time a Cat or Skull lands the number of spins will be reset to three and the multiplier number above their reel will be incremented by 2x, 3x, 5x, 10x or 20x (Cat) or +1, +2, +5, +10 or +20 (Skull). Epic Cats and Skulls can also appear with a striped background which means that their respective values will be added above all reels. After three non-winning spins the round is over.

Chaos Crew is all about the gritty atmosphere created by the developers and the various graphical effects which occur when big wins hit or features are triggered; luckier players will certainly see some profit from the free spins round.