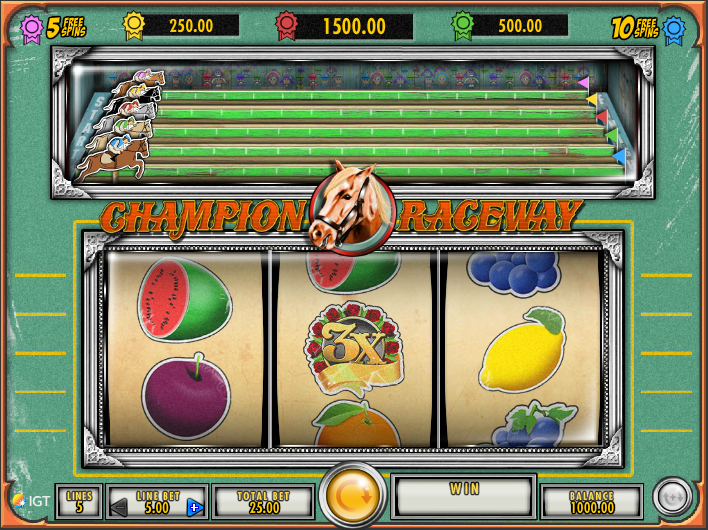 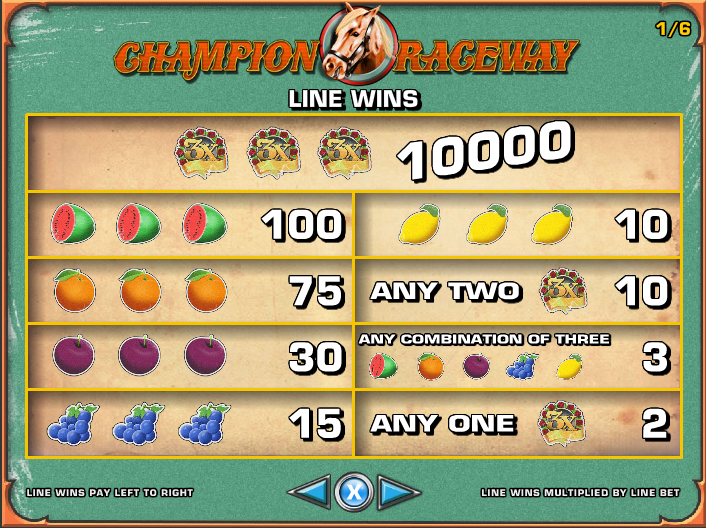 Online slots based on horse racing are certainly few and far between but quality is often preferable to quantity and here’s one more top notch example to add to the list; it’s called Champion Raceway, it’s developed by IGT and it comes with a creative bonus feature.

Champion Raceway is a three reel slot with just five paylines and all the action takes place on a set of reels set into an ornate silver frame; a handsome horses head occupies the space above those reels while at the top of the screen there’s a five horse raceway which is integral to the bonus feature.

All the symbols are fruity in nature and include watermelons, oranges, plums, grapes and lemons.

The ‘3x’ symbol is wild and will replace all others to form winning combos, multiplying that win by 3x; it will also pay out on it’s own – 2x for one, 10x for two and a massive 10000x for three on a payline.

A combination of any three fruits will also win, paying out 3x your stake.

This is where the real fun is in Champion Raceway so let’s just remind ourselves that there’s a toy racetrack above the reels with five horses of varying colours. Each of those colours corresponds to a prize as follows:

Each time a symbol with an accompanying coloured rosette lands on the reels, that colour horse will move one place forwards; when a horse reaches the end, that particular prize is awarded. The free spins awards differ slightly:

Champion Raceway comes with more excitement than the usual three reel slot and it’s great fun watching the little horses make their way to the end of the track; the nature of the gameplay means there’s a guaranteed win if you stick at it. This game comes with an RTP ranging from 92.81% to 96.66%.