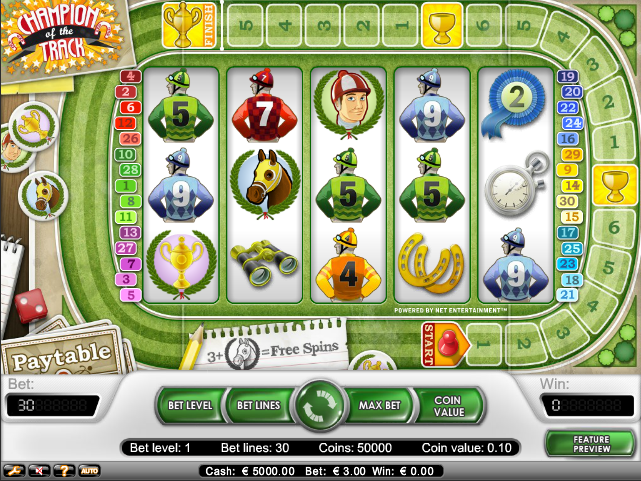 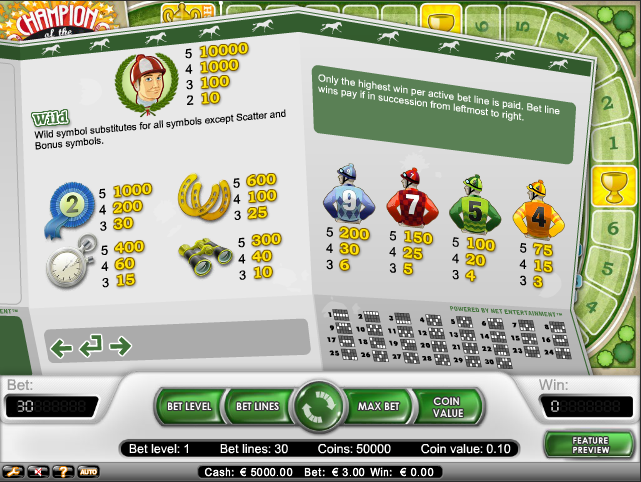 Net Entertainment’s online slots often feature a bonus game or something else innovative and that’s why we like playing them so much; it’s also why these slots are so popular at venues such as Harry Casino and Betsson.

Champion of the Track is another great example of how to design and implement a compelling and entertaining game; it’s based on the sport of horse racing and not only do you get a top notch slot machine, you also get a bonus feature which involves making your way around a racetrack.

Let’s describe the slot first though and it features five reels and thirty paylines.  The reels spin in what looks like a table top board game with dice, counters and cards spread around the outside.  Four jockeys in different coloured outfits make up the lower value symbols but the higher values are some binoculars, a stopwatch, a pair of horseshoes and a blue rosette.

Special symbols are a a jockey’s head in a wreath wild, a horses head scatter symbol and a bonus game trophy.

The first thing you’ll notice about the reels is that there’s a track running around the outside; you make your way around this by collecting moves while in the free spins round and the bonus game.

Reaching certain points on the track will award you with Golden Cup mystery wins or, if you reach the end, the Champion Trophy Career Bonus.  Your track position will be saved for 48 hours following your last spin so make sure you return to this slot within the time limit.

As you can see from the video below this can be a very long free spins round. You trigger it by landing three or more horse scatter symbols anywhere on the reels and you’ll be rewarded with ten spins with a 2x multiplier.

In the video you will see the horse race taking place underneath the reels and each time you land another scatter symbol during the free spins you’ll overtake a horse and tick off one horseshoe. Scratch off five horseshoes and you’ll get ten more spins and move one place along the track.

A Day At The Races Bonus Game

Landing three of the trophy bonus symbols in succession on an active payline gains you entry to the bonus game.  Pick one of four jockeys and then watch as a race begins.  Depending on where your jockey finishes you will receive a cash prize, up to four moves along the career track and a multiplier up to 5x.

Champion of the Track is an almost flawless slot and certainly one of our current favourites; two great bonus features contribute to the Career Bonus which will keep you coming back to try and complete the circuit of the track. The graphics and animations are also consistent with Net Entertainment‘s high standards.