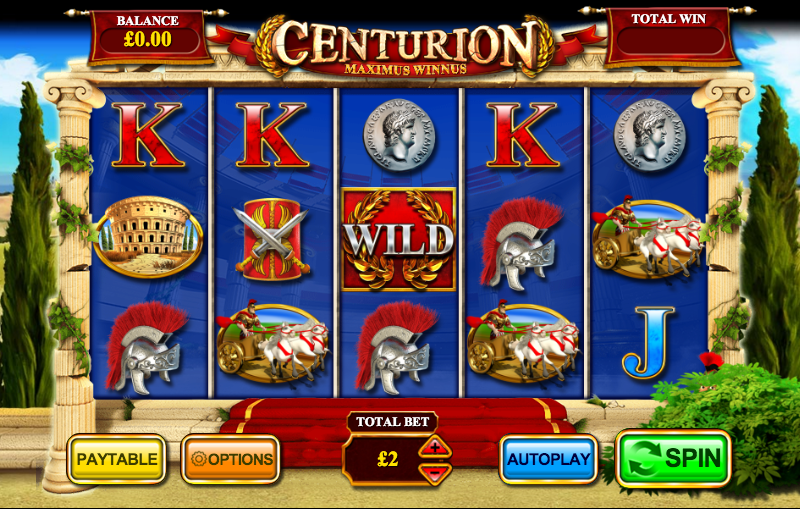 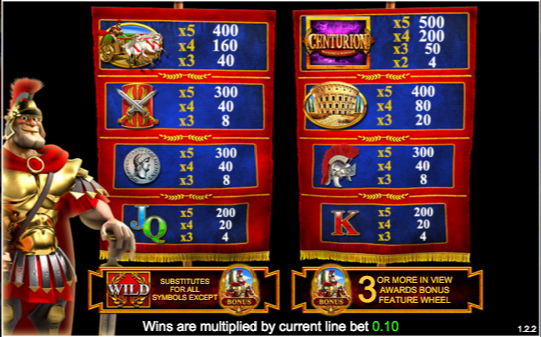 Ancient Rome is once more our destination as we take a look at this action packed online slot from Inspired Gaming. It’s called Centurion and it follows the career of a jobbing soldier as he works his way up through the military ranks – helped by you of course. All the essential details are below.

Centurion is a five reel slot with three rows and twenty fixed paylines; the reels spin between cracked columns below the Maximus Winnus banner at the top and there’s a blue sky to keep things cheerful.

The symbols are largely theme-related and include the game’s logo, a charioteer, shield/swords, a Roman coin, the Colosseum and a helmet; J, Q, and K make up the lower values.

A golden wreath is the wild symbol and it substitutes for all others except the bonus icon – that’s represented by the centurion bonus.

There are plenty of these and they’re triggered by landing three or more of the centurion bonus symbols anywhere in view; a bonus wheel will now appear and spinning this will determine which of four mini-games you get to play:

This happens randomly in the base game when the centurion blows his trumpet and there are four possible mini-bonuses:

It’s hard to argue with a slot containing so many bonus features and Centurion is also a high quality game in terms of graphics and animations. It’s well worth checking out with an RTP of 95.00%.