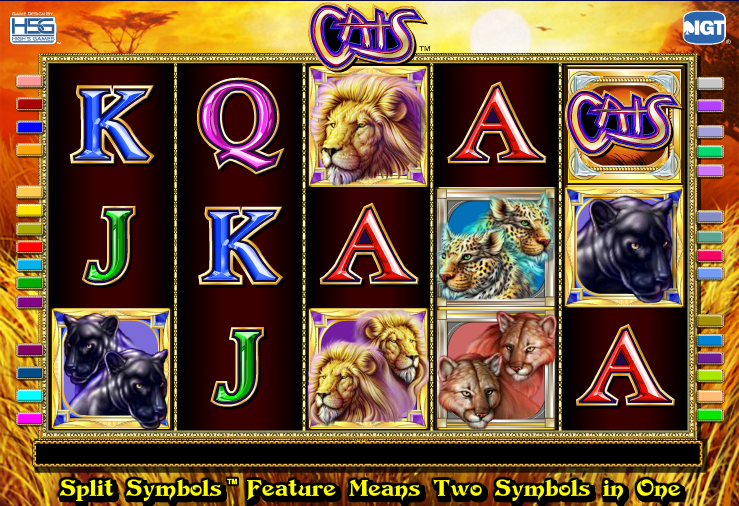 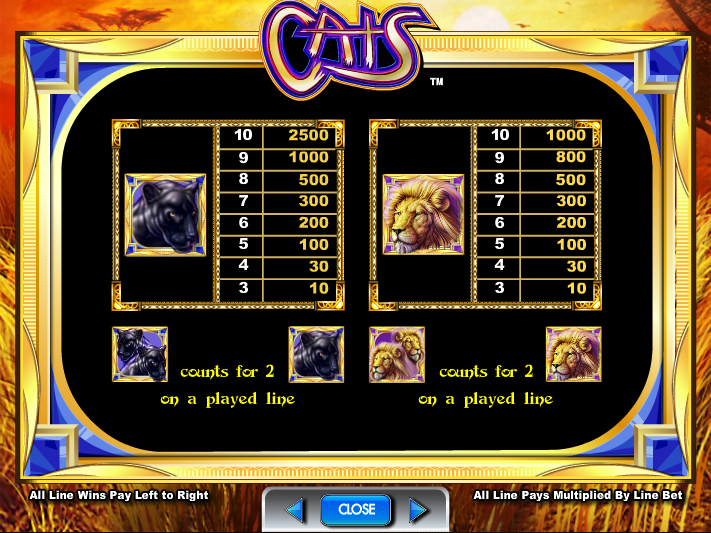 Whether you’re a dog or cat kind of person, most people won’t deny that our feline friends are furry, cute-looking creatures.  However if you’re expecting Cats, this online slot from IGT, to feature our cuddly domestic friends you’ll be barking up the wrong tree.

Cats is all about lions, tigers and all those other big cats which roam the wild areas of our planet; it’s a five reel and thirty payline game set in some scorching savannah with the sun blazing in the background.

J, Q, K and A are the lower value symbols but there’s a range of beautifully-drawn big cats which make up the higher values.  We have a leopard, a lion, a tiger and a panther among others.  A paw print  is the scatter symbol which activates the bonus game and the wild is a big ‘Cats’ logo.

This may be the feature which wins you the most money in the game and you will notice when you spin the reels that each animal features twice on a number of the symbols.  If you land this it will count as two of that symbol and will obviously make the creation of winning combos easier as it’s possible to land up to ten or each.

This feature also helps to trigger the free spins round as the paw prints symbol is similarly doubled. Additionally when the wild symbol helps to create a winning payline it always substitutes a double symbol.

There’s also a free spins round which can be triggered by landing five or six of the paw print symbols anywhere on the centre three reels.  Five paw prints will reward you with a measly five free spins but six will get you a more generous ten.

The reels you play during the free spins round are adjusted so that you can win more during this phase.

Although the music feels like it doesn’t really fit the theme this is a fun slot to play nonetheless; the double symbol feature adds significantly to the basic gameplay while a free spins round is always popular.