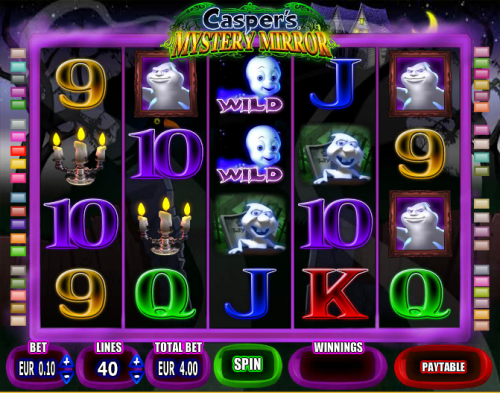 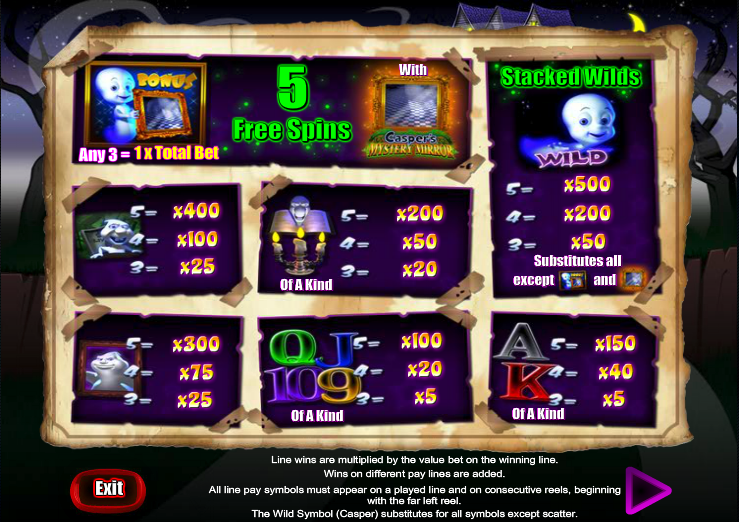 Despite the relatively recent nature of the popularity of Casper, the original comic character can be traced all the way back to the 1930s.  The 1995 movie, Casper, is of course based on the character from those early days and tells the story of a friendly child ghost and his efforts to befriend real humans.

Casper’s Mystery Mirror is a colourful online slot from Blueprint Gaming with five reels and a possible forty paylines; it benefits from loads of spooky, Casper-related symbols and features and if you like to play slots with the sound on you’ll appreciate the cheerily haunting soundtrack which varies as you play the game.

We have the standard playing card symbols here of 9, 10, J, Q, K and A but the more valuable symbols are various ghost characters.  There’s a Casper wild symbol and a Casper bonus symbol which acts as the scatter.

There’s only one bonus game here but it’s a fun one and you’ll need to land three of the Casper scatter symbols on reels two, three and four to trigger it.  You’ll now win five free spins which may not sound like much but the Mystery Mirror comes into play here.  When you land a Mirror on the reels a random symbol is chosen which is then replicated in every Mirror on the reels.  These become sticky, increasing your winning chances with every spin.

In standard play the Casper wild symbols are stacked which should lead to greater winnings if they are part of a winning combo.  The wilds can also be landed simultaneously on different reels to provide even bigger wins.

We like Casper’s Mystery Mirror – it’s a fun, simple and cheery diversion which should appeal to all wallet sizes – you can bet from as little as €0.01 for one payline up to €240 with all settings maxed out.