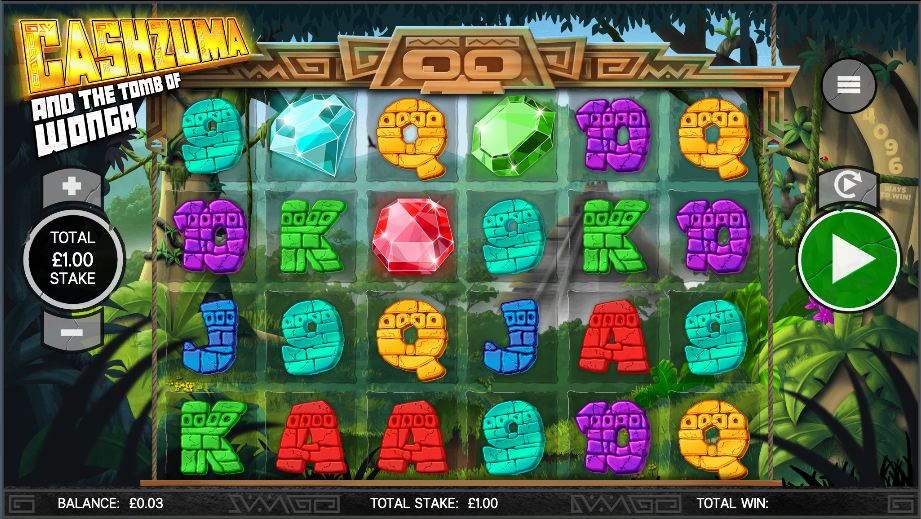 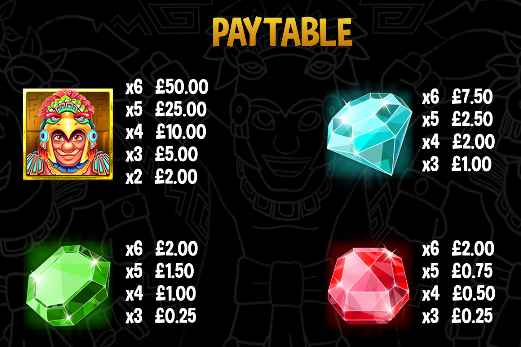 Somewhere deep in the South American jungle there are temples still waiting to be explored by brave adventurers and one such location is the theme of this online slot from Core Gaming; it’s got the lengthy title of Cashzuma and the Tomb of Wonga and it offrers players the choice of two free spins modes.

Cashzuma is a six reel slot with four rows and 4096 ways to win which means that there’s no payline structure and wins are formed as long as there are matching symbols in adjacent rows starting from the left hand side. Through those transparent reels we can see a temple rising above the treetops.

The chief and the blue, green and red jewels are the higher value symbols while 9, 10, J, Q, K and A make up the lower values.

The purple symbol is wild and it will replace all others to help form winning combos except for the gold bonus symbols.

This slot uses cascading reels which means that any symbols in a winning combo will be replaced by more falling in from above – new combos may then be formed and this can continue until there are no more wins.

This is triggered by landing at least three of the bonsu symbols anywhere in view and you’ll get to pick between the following two options:

Landing at least two bonus symbols in either mode will award up to 15 extra spins to keep the fun going.

Cashzuma is one of our first experiences of Core Gaming slots and a lot of fun it is too – cascading reels, two free spin modes, high quality graphics and gameplay – what’s not to like?