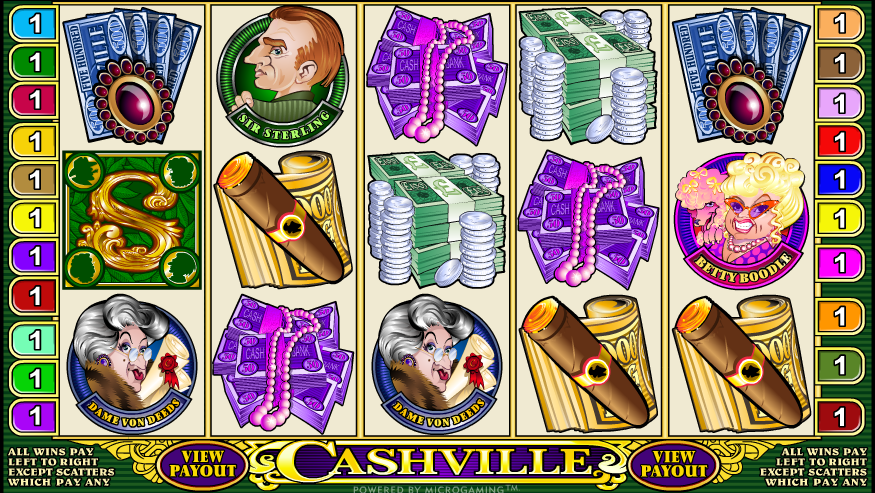 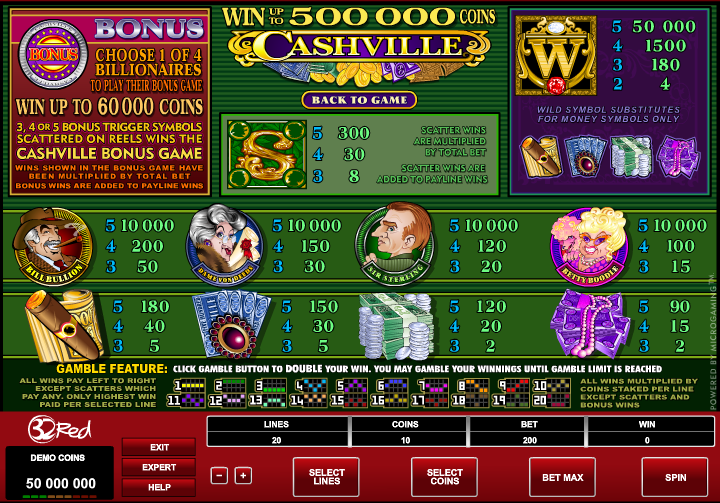 Even if there isn’t such a place as Cashville, there obviously should be; it sounds like the sort of place where the streets are paved with gold and money rains from the sky. You may even be able to afford to visit if you strike it lucky while playing this action-packed online slot from Microgaming – it’s all about money and the wealthy characters who inhabit this town.

Cashville is a five reel and twenty payline slot; those reels are oversized and leave no space for any sort of artistic background but that’s OK, it’s all about the symbols.

Those symbols all reflect wealth to one degree or another and include four characters – Bill Bullion, Dame von Deeds, Sir Stirling and Betty Boodle – and then four piles of money each associated with one of the characters.

There’s  a gold ‘S’ scatter symbol, a ‘W’ door knocker wild and then a circular silver bonus symbol which activated the main feature.

To trigger this mini-game you will need to land three or more of the silver bonus symbols scattered anywhere on the reels. This is fairly brief game but it seems to get triggered pretty regularly and all you need to do is select one of the four characters who will then you offer a choice of items as follows:

The choice you make will reveal a random coin win of up to 60,000 and it’s also worth noting that the more bonus symbols you land to trigger the feature, the more picks you will get per character.

If you’d like to wear your most recent win in a 50/50 game then just click the ‘Gamble’ button under the reels to play. Just predict whether the next card will be red or black to double you money or lose it all.

Take care with the gamble feature; it’s tempting to fritter away each win on a wager which you will lose eventually. Use it sparingly.

This slot looks nice enough but doesn’t really offer much in the way of bonus features. The theme is quite amusing though and the characters well-drawn.