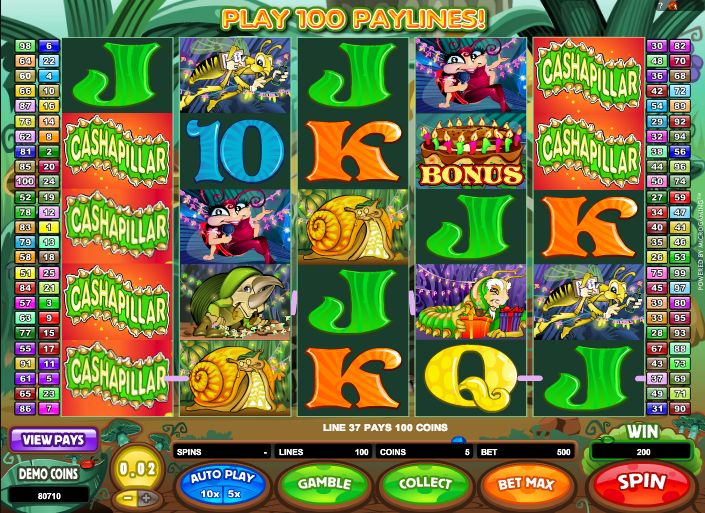 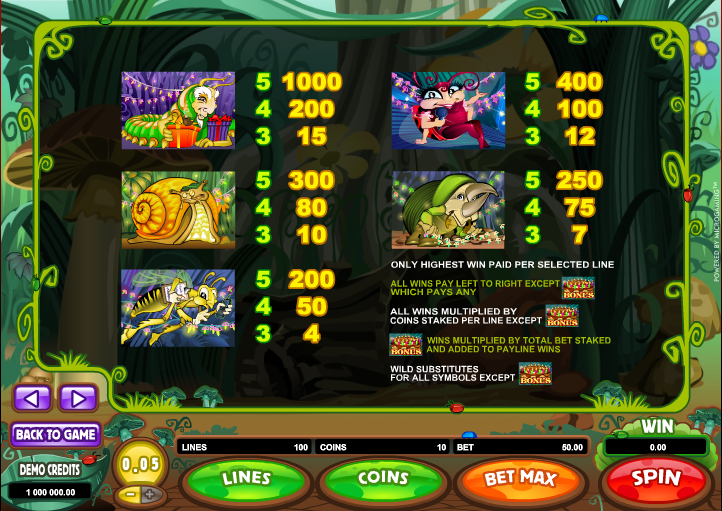 A twinkly soundtrack, cute characters and some vibrant splashes of colour – this is the Cashapillar online slot from Microgaming subsidiary Quickfire;  at first glance it would seem to be based on a children’s story or fairytale but we don’t think it is – it’s just a collection of nicely drawn characters.

Cashapillar features five reels and a massive one hundred paylines; it also has five rows of symbols rather than the more standard three which means the screen always seems to be full of action.  It’s a woodland setting and plenty of greenery is viewable behind the reels.

Five animal characters are the main symbols and they are a friendly-looking wasp, a green beetle, a yellow snail, a red ladybird and a green caterpillar. Low value symbols are 10, J, Q, K and A.  The Cashapillar logo is the wild symbol and as it’s the Cashapillar’s birthday, the bonus symbol is a birthday cake.

The wild symbol is stacked on all reels in the base game and the free spins which means that more than one wild symbol will appear on top of one another.  This gives the player more chances to create winning combos.

In the base game, any wins including the wild will be doubled.

Did somebody say free spins? Absolutely – all you need to do is land three, four or five of the birthday cake scatter symbols anywhere on the reels to activate this feature.

You’ll get fifteen spins regardless of the number of scatters, but of course the more you land, the higher the initial prize you’ll win.

Winning symbols which include the stacked wild can be worth up to 6x the line bet; additionally all wins in this feature are tripled so it can be a lucrative bonus.

If you’d like to gamble you most recent win, just click the ‘Gamble’ button underneath the reels; you’ll now play a game in which you predict whether the next playing card will be red or black.  Guess correctly and double your win but get it wrong and you’ll lose it all.

Playing with maximum paylines will give you the chance to win huge prizes – 2 million coins for five wilds or 6 million coins during the free spins.  It’ll cost a little more but it could change your life!

Despite not featuring a progressive jackpot, Cashapillar has a large and tempting coins jackpot available which should attract plenty of players.  It’s a riot of colour balanced by the relaxing soundtrack and well worth a go.