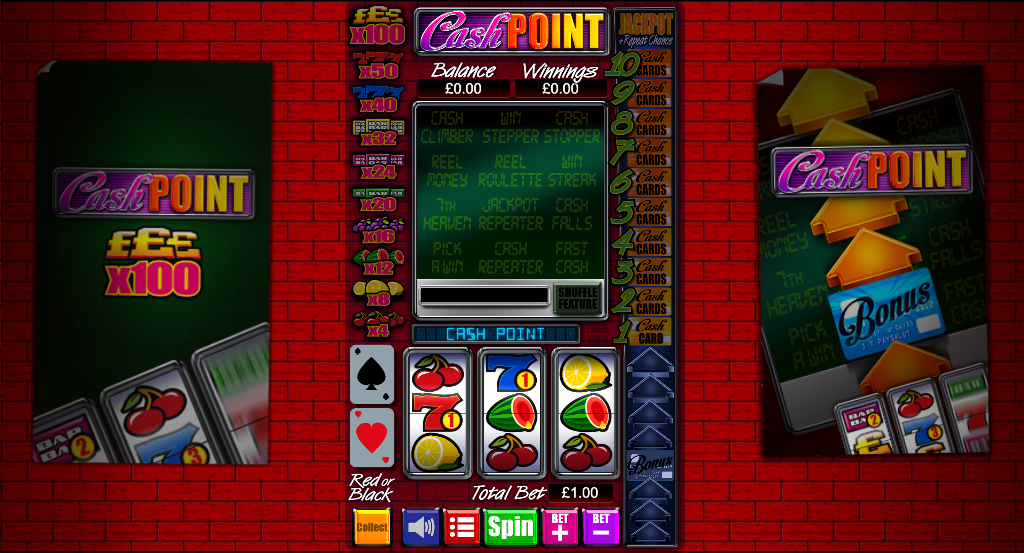 If you miss the good old days of standing in the corner of a pub and spinning the reels on a UK-style fruit machine than this online slot from betdigital might bring back some memories; it’s called Cash Point and it comes with plenty of features to remind of us of the old days.

Cash Point is a three reel slot with three rows and one payline; it’s designed to look like the face of a fruit machine with lots of flashing lights and features ready for action above those reels.

There are some familiar symbols on show here including a golden pound sign, red and blue sevens, single, double and triple bars, grapes, watermelons, lemons and cherries. There are no wild or bonus symbols in Cash Point.

Some of the symbols on the reels also show small numbers and these are calculated on each spin to work your way up the trail (the arrows in the bottom right hand corner). Progress can be held randomly from one spin to the next if you are lucky. If you reach position four one of the following mini-bonuses is awarded to try and move you along a bit further:

Reaching position eight or above on the trail will start this bonus; one of the following features is picked for you but just press ‘Shuffle Feature’ to try for a different one:

This can occur on any spin, the game’s title will turn red which means that a large win is on the way.

Cash Point really does channel the spirit of the good old fruit machine with it’s design and offering of multiple  small features; the number trail is the basis of it all and all that’s missing are some ‘Hold’ buttons under the reels and a sticky carpet. This game comes with an RTP of 95.84%.