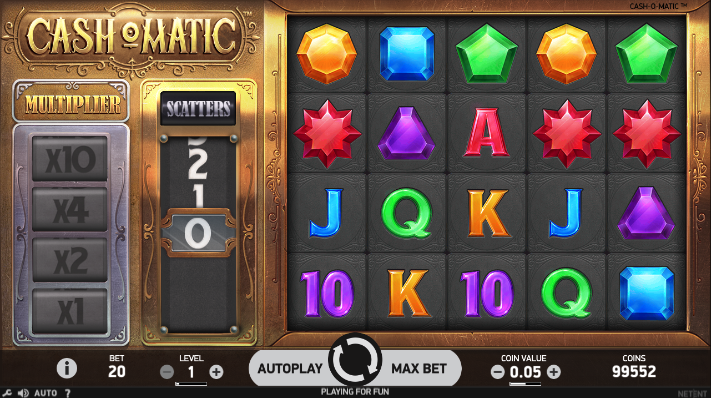 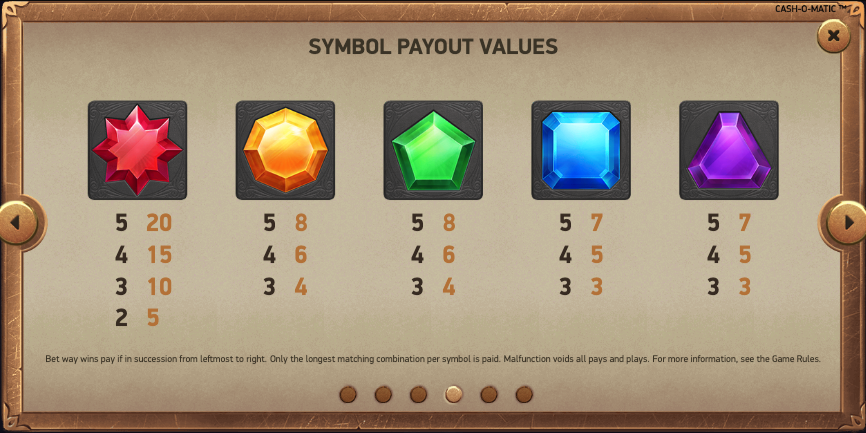 Fresh from the creative minds at Net Entertainment is this online slot machine with some simple looks but but some clever features to keep things interesting; it’s called Cash-O-Matic and it offers free spins, collapsing reels and generous win multipliers.

Cash-O-Matic is be a five reel slot with four rows and 1024 ways to win; there’s a mechanical Victorian design to the game with the suspicion that this game might have featured in a novel such as The Time Machine by H. G. Wells – the musical soundtrack only adds to the atmosphere.

Gameplay in Cash-O-Matic is a little unusual and called Avalanche, it’s something like the opposite of collapsing reels because each winning combo will remain while all other symbols will disappear; the winning symbols will fall to the bottom and new symbols will arrive from above. Each full line created (Tetris-style) from the bottom up will increase the win multiplier shown to the left of the reels up to a maximum of 10x in the base game.

Five gems in red, orange, green, blue and purple represent the higher value symbols while 10, J, Q, K and A make up the lower values. There’s no wild symbol in this game but there’s a scatter which is the key to the main feature.

This is triggered by collecting at least ten scatter symbols, usually over a few Avalanche drops and the number collected will be shown on the meter to the left of the reels; the number of spins awarded is the number of scatters collected. The multipliers for filling in rows are more generous during this round and additionally each full row will award one extra free spin.

Even for Net Entertainment, Cash-O-Matic is an unusual slot but it’s one we’ve enjoyed playing, probably because we always enjoy collapsing reels or some version of that. You’ll have to reach the free spins to win some serious cash but you’ll have fun trying.