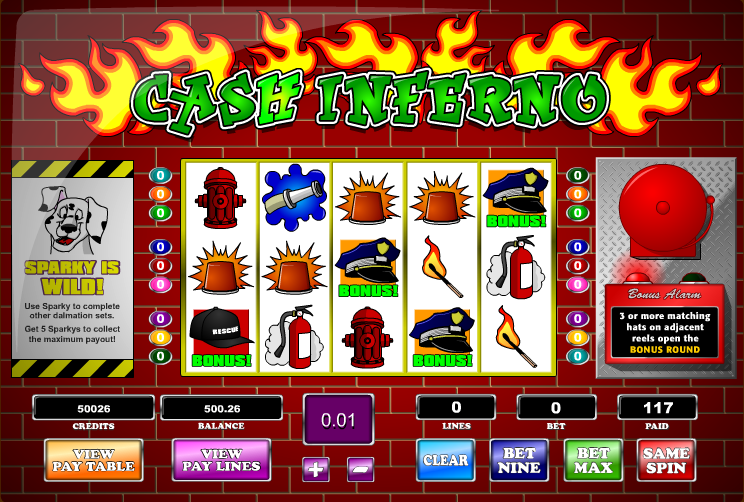 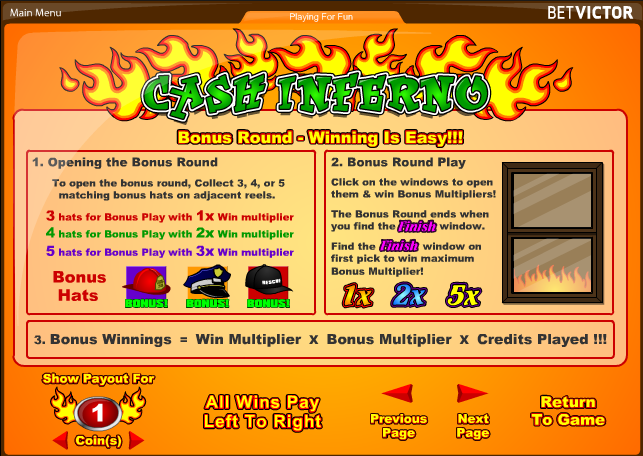 Cash Inferno is an interesting online slot machine from Amaya Gaming which looks pretty basic but which contains  a number of bonus features to accompany your gameplay. The theme is one of a fire emergency but it also includes a dog called Sparky who adds some animal charm to the proceedings.

Cash Inferno is a fire-themed slot featuring five reels and nine paylines and the blazing title above the reels makes it quite clear that there’s an emergency in progress. All the main symbols are them-related and so we have a red flashing light, a fire hose, a fire hydrant, a burning match, a fire extinguisher and a dalmatian dog.

We’ve already mentioned Sparky the dog and he acts as the wild symbol and there’s also several hat bonus icons which are integral to activating the bonus feature.

There are three different types of fireman’s hats – a red hard hat, a captain’s hat and a baseball cap – and they are the bonus symbols which you need to trigger this feature.

You must land three of the same symbols on adjacent lines to trigger the feature – they’re not quite scatter symbols but they don’t have to start on the leftmost reel. Three, four or five hats will mean that you start the feature with a  1x, 2x or 3x multiplier.

You will be taken to a screen displaying a number of windows and your task is to click on each one, picking up multipliers as you go. When you find the ‘Finish’ message the game is over. If you find it on your first click you will win all the prizes.

The prizes in the bonus feature increase disproportionately the more you bet so high rollers can take advantage of the bigger rewards on offer.

This is a basic-looking slot but sometimes there’s nothing wrong with simple gameplay; it all looks quite appealing and the feature at least offers something a little different from the usual free spins.