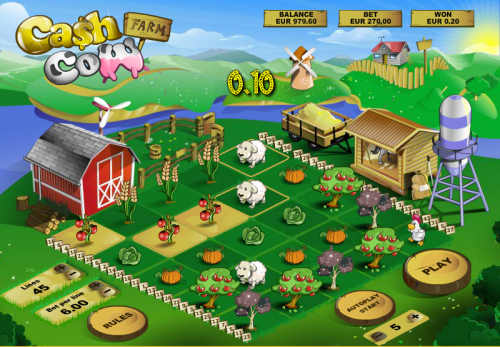 If we were asked to describe Cash Cow without access to visual aids of any sort we might describe it as a cross between Farmville, noughts and crosses and a slot machine; then we’d discard that explanation and start again, eventually giving up.  Fortunately we have access to the game and screenshots and can explain Cash Cow with help.

It’s essentially a five reel, forty five payline slot from Revolver Gaming in which the reels don’t spin; instead the symbols sprout from a 5×5 grid field which works well with crops but is a little surprising when a sheep or cow emerges from the ground.  The view is a 3D perspective and it’s a charming rural scene with animals, farm buildings, a river and hills.  So instead of spinning reels, you press the ‘Play’ button and twenty five assorted things will grow from the ground.

The symbols are all amazingly cute and we have sheep, chickens, pigs, cows and tractors as well as two types of trees, cabbages, pumpkins, corn and tomatoes.  The pigs and the cows are the scatter symbols while the tractor is the wild, only appearing on reels 2, 3 and 4.  Land three tractors and receive ten free spins.

The bonus games are triggered by landing three of either the cow or pig scatter symbols and trigger the following games:

Land three or more cows anywhere on the field and you will have the opportunity to pick six cows, each revealing a prize.  When you’ve done, pick one more for the multiplier to enhance your bonus game winnings.

Landing three or more pigs will give you the chance to play a Pachinko-style game which gives you the opportunity to drop pigs into mud baths.  Each mud bath is worth a different cash prize and a multiplier will be awarded for the total win.

Cash Cow is an odd but endearing game which everybody should try at least once if only to appreciate the lovely graphics and funky soundtrack.  Low and high rollers will appreciate the stake amounts – £0.01 on one payline is possible while the maximum payline stake of £6 on 45 paylines means a total spin wager of £270.  Give it a go.