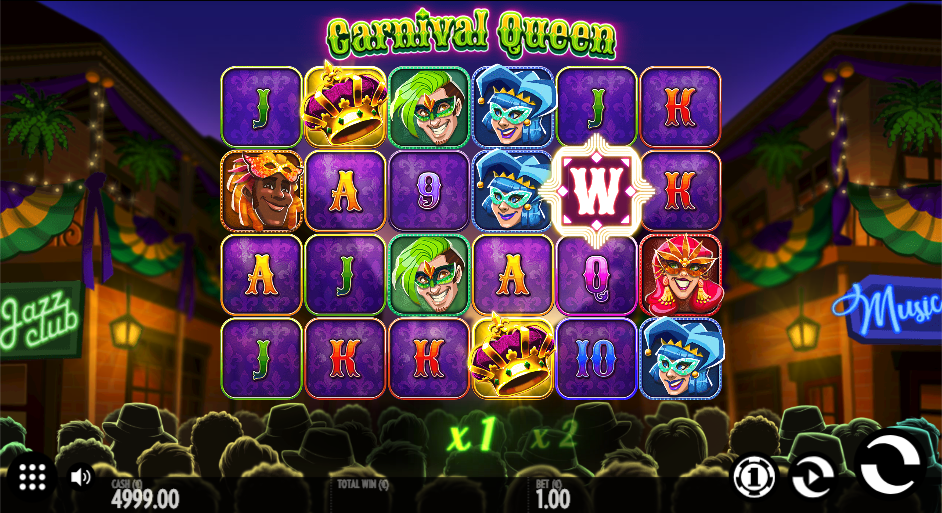 The setting is New Orleans and the time of year is Mardi Gras for this party-themed online slot from Thunderkick Games; it’s called Carnival Queen and it offers players free spins as well as the clever Avalanche feature.

Carnival Queen is a six reel slot with four rows and 4096 ways to win which means that there’s no payline structure and wins can be formed as long as there are matching symbols on adjacent reels starting from the left hand side. There’s a pounding soundtrack to the gameplay which takes place on a set of reels floating above the heads of revellers on a New Orleans street.

The five higher value symbols include the queen’s golden crown and four masked partygoers who all look like they’re having a good time; 9, 10, J, Q, K and A represent the lower values.

The wild symbol is a big, ornate ‘W’ which will replace all others to help form winning matches except for the masked lady bonus symbol.

Perhaps better known as collapsing reels, this sees any symbols in winning combinations disappear to be replaced by more falling in from above – those new symbols can then make more wins and this process continues until there are no more matches.

There’s also a multiplier for any wins which increases by 1x with no maximum with every new avalanche drop.

This is triggered by landing three of the masked lady bonus symbols anywhere in view for which you will receive an initial twelve free spins – any extra scatters will award four more spins each.

More free spins can be won during this round by landing more bonus symbols.

Carnival Queen adds a new dimension to slots based on Mardi Gras, especially when it comes to the Avalanche feature and how it ties in to the free spins round; it’s all tied together with a thumping bassline to create a party atmosphere.