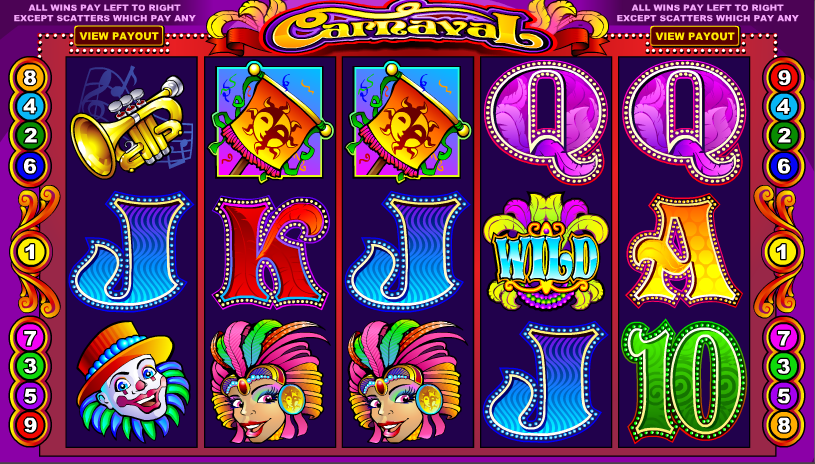 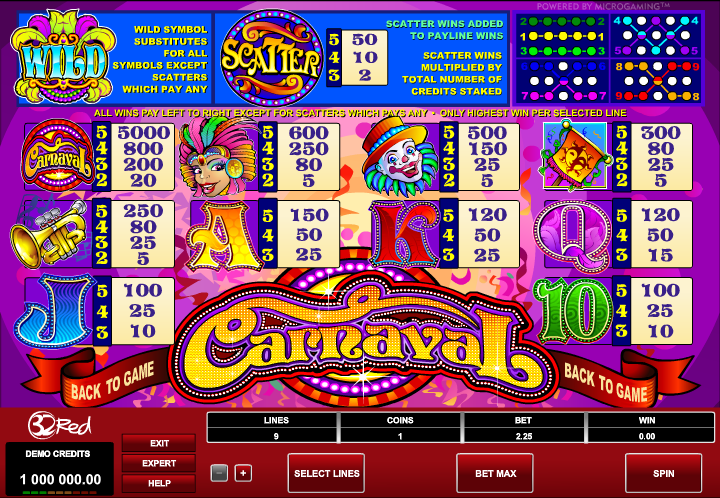 Carnaval is bright, noisy and cheerful online slot machine from Microgaming; the theme is a fantastic street carnival and we’re going to assume it’s based on the Rio de Janeiro carnival; the world-famous festival held in Brazil’s second city in the build-up to Lent which attracts millions of people onto the streets every day.

Carnaval is a five reel and nine payline game which is amazingly fast-moving.  It may well be the brightest and most colourful game we’ve ever played and that’s probably appropriate for a slot based on the Rio Carnaval.

Even the playing card symbols which represent the lower values are highly decorated so that they add to the overall effect rather than detract from it.  The higher value symbols are a trumpet,  a paper lantern, a white-faced clown, one of the dancing girls and the Microgaming’s Carnaval logo.

The first thing you may notice about Carnaval is that there’s no bonus features; for those who like free spins and other bonus games this is of course a bit of a drawback but for those who appreciate a slot in it’s purer form this could be just the thing.  The scatter symbol which would normally trigger a bonus game acts just like another symbol here, although it can of course win when not on a payline.

When you first start playing this slot you’ll be playing ‘Regular’ mode but if you’d like to take advantage of the Autoplay options you’ll need to click the ‘Expert’ towards the bottom left of the screen.  Here you can select the number of spins you’d like from five all the way up to five hundred.

Don’t be put off by the fact that Carnaval contains no bonus features; it’s worth playing for a while at least because of the dizzying speed, eyeball-assaulting colour and funky soundtrack.