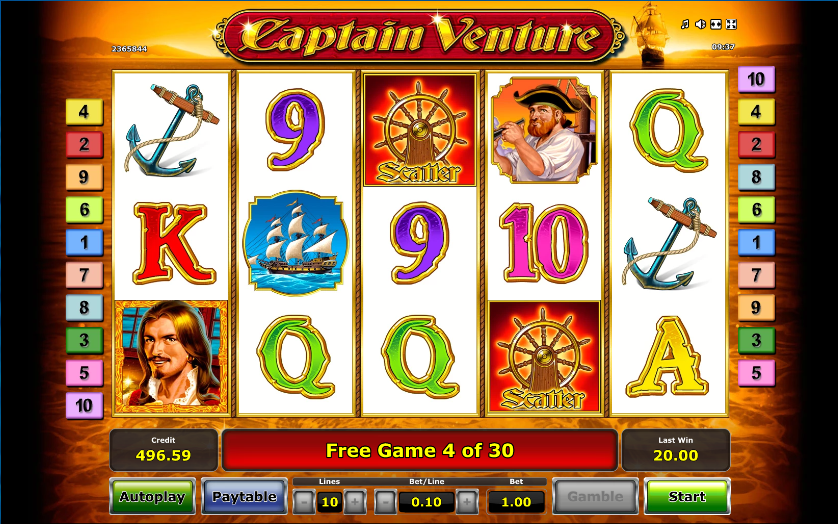 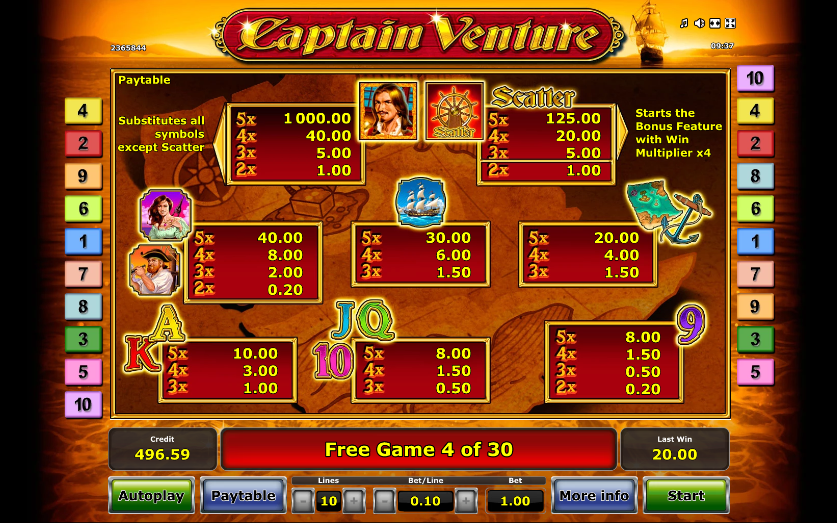 It’s time to take to the high seas once more to revel in the antics of some salty sea dogs as we check out this online slot machine from Novomatic; it’s called Captain Venture, it comes with plenty of free spins and an opportunity to gamble your winnings.

Captain Venture is a five reel slow with three rows and up to ten paylines; the design is typically Novomatic and quite basic but behind the gold-rimmed reels there’s a Caribbean vista and Venture’s ship moored just offshore.

The higher value symbols include male and female characters, the ship, a treasure map and an anchor; 9, 10, J, Q, K and A represent the lower values.

Captain Venture is the wild symbol and he’ll substitute for all others to form winning combos except for the ship’s wheel scatter icon.

This is triggered by landing three or more of the ship’s wheel scatter symbols anywhere in view and you will now get to spin the (ship’s) wheel of fortune which will award between ten and twenty free spins. All wins during this round are subject to a 4x multiplier but if the wild symbol is involved it will be doubled again.

The reels spin a little differently during this feature with each symbol revealed from underneath a ship’s wheel in each position. Landing three or more scatters will award more free spins.

Each win can be gambled and it’s a prize ladder so if you want to keep doubling/risking your money just try to work your way up it by pressing the flashing button.

Captain Venture is perhaps a little basic in the graphics department but these Novomatic slots have their fans and this one will probably be no different. We triggered lots of free spins while playing this game and it comes with an RTP of 94.01%.