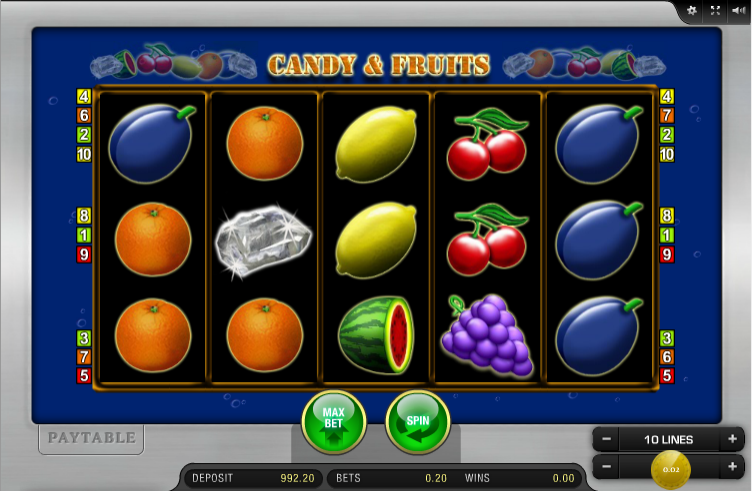 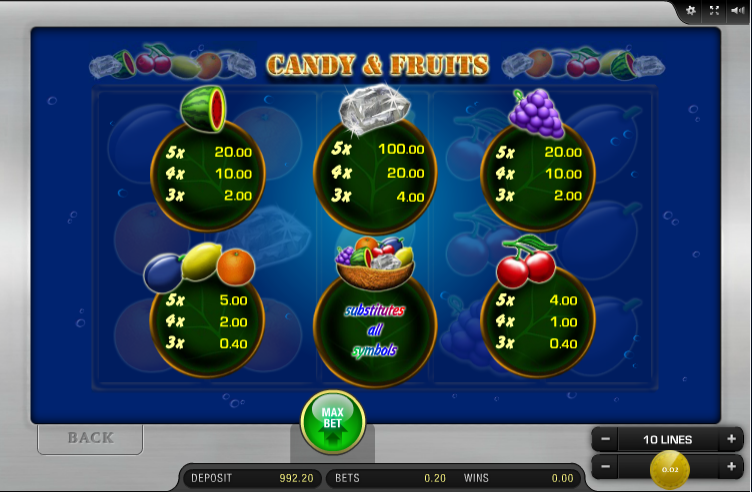 We’ve said it before and we’ll almost certainly say it again – simplicity is occasionally a virtue when it comes to the world of online slots and there are times when one can be overwhelmed by complex bonus features and mini-games. Some may call the antidote boring but we think there’s a place for games such as Candy & Fruits – it’s basic, good-looking, it’s developed by Merkur Gaming and it’s slightly reminiscent of the fruit machines we used to play in the arcades at Clacton – check out our review below.

Candy & Fruits is a five reel slot with three rows and up to ten paylines; the neat orange-rimmed reels spin on a background that appears to be underwater – at least we think those are little bubbles floating against the dark blue.

There aren’t many symbols on show here and there are certainly more fruits than candies – we have a watermelon. a bunch of grapes, plums, lemons, oranges, cherries and a whitish glistening thing that’s probably some sort of boiled sweet. The sweet is also the most valuable and worth 5000x your line bet for five on a winning payline.

The wild symbol is represented by a basket containing each of the aforementioned fruity and sugary items; therefore it can make a winning combo of any of those things (just like a normal wild symbol). The wild is the nearest thing to an extra feature here so make the most of it’s rare appearances and enjoy it while it lasts (much like a sweet in fact!).

With both versions a wrong move will lose all your winnings.

That’s all there is to say really – it’s traditional and slick at the same time but probably only for those who shy away from the bonus features.  The ten paylines mean there’s a betting range of between £0.01 and £20.00 so this may not be for high rollers and there’s an RTP of 96.00%.