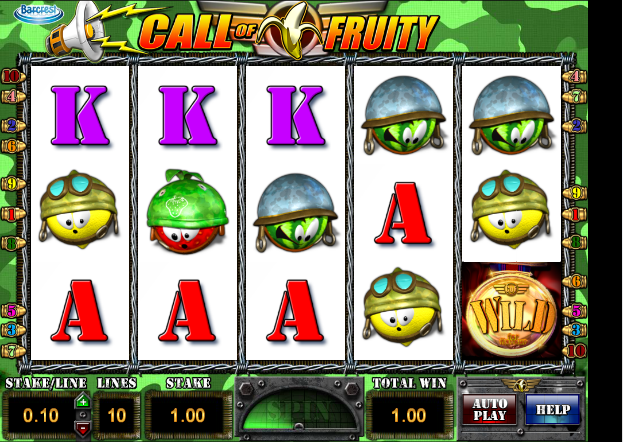 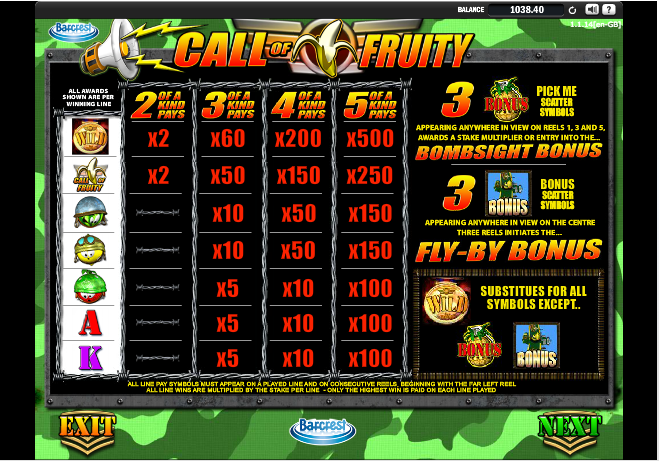 Seasoned video gamers will instantly recognise the title of this online slot from Barcrest – it’s called Call Of Fruity and it’s a war-themed game based on the long-running Call Of Duty franchise although it’s fair to say that it’s more light-hearted than it’s predecessor. It comes complete with some eccentric sound effects and two bonus features so read on for more information.

Call Of Fruity is a five reel slot with three rows and ten fixed paylines. The reels spin within barbed wire dividers against a camouflage background and there are some nice design features – the bullets which mark the paylines and the radar ‘Spin’ button.

There are four high value symbols three different fruit soldiers – a strawberry, a watermelon and a lemon – plus the banana logo. A and K make up the numbers.

The wild symbol is a gold medal and there are two bonus icons – the pineapple and the Fly-By symbol – which trigger the features.

This mini-game is triggered by landing three of the Fly-By bonus symbols anywhere on reels two, three and four; those three central reels will become completely wild while reels one and five will respin once. That of course means some guaranteed wins and hopefully some big ones.

Trigger this feature by landing three of the pineapple bonus symbols anywhere on reels one, three and five; now pick one of those symbols to reveal either a multiplier of your line stake or entry into the Bombsight Bonus.

For speed we would choose the the ‘offer’ option during the Bombsight Bonus to avoid all the clicking and jumping but the choice is yours.

Call Of Fruity is good fun, if not graphically particularly sophisticated; looks aren’t everything however and the easily-triggered bonus features make this one to check out. It has an RTP of 95.20%.