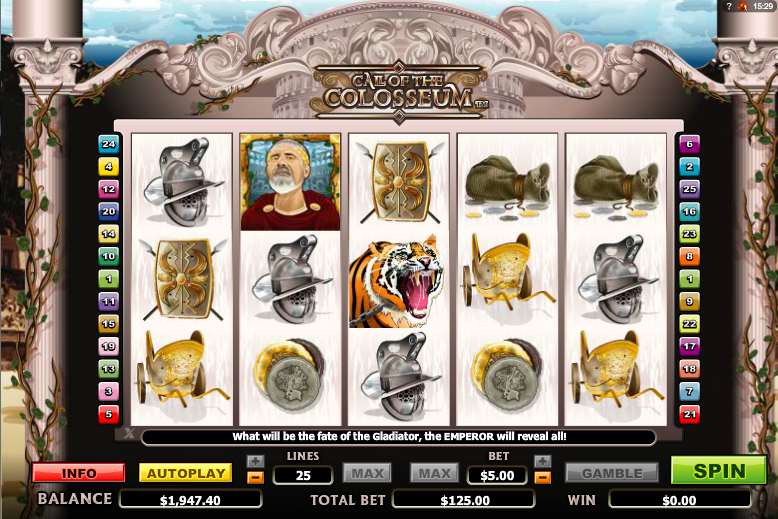 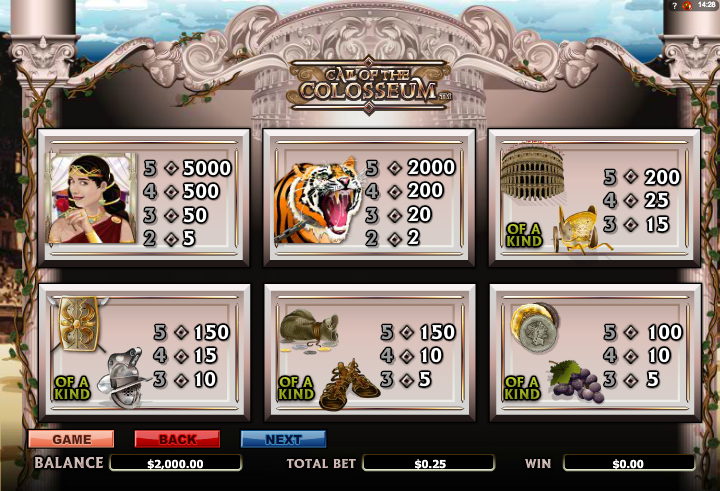 A trip to Ancient Rome is something that should never be passed up by potential time travellers or online slots players. It’s a theme that’s been visited plenty of times before by slots developers and this time it’s the turn of Nextgen Gaming to offer us something based on an empire that once ruled huge swathes of the world. It’s called Call Of The Colosseum so read on to find out more.

Call Of The Colosseum is obviously based on the fearsome combat which used to take place in these impressive arenas. It has five reels and twenty five paylines and it all takes place between two ornate columns and underneath a sculpted edifice.

All the symbols are related to the theme and they include a bunch of grapes, coins, leather sandals, a bag of coins, a warrior’s shield and helmet, a chariot, the Colosseum, a dangerous-looking tiger and a sultry female.

The emperor is the wild symbol who appears on reels two, three and four and there’s also a scarred shield which represents the scatter symbol.

If you like free spins than this should be right up your street; you can trigger this feature by landing three or more of the shield scatter symbols anywhere on the reels.

If you’d like to bet that last win on a turn of a playing card, just click the ‘Gamble’ button underneath the reels to try and double or quadruple your win by picking the correct card colour or suit.

Low rollers may appreciate the opportunity to trigger the free spins with just one payline; you’ll have the same chance as someone playing maximum paylines because it’s activated by a the scatter symbol. Of course the prizes are proportionately greater the more paylines you have activated.

This game is a little dated but it’s not bad – the graphics and animations are up to scratch and the free spins tend to be extended dramatically with the appearances of the emperor’s thumbs. Give it a go.