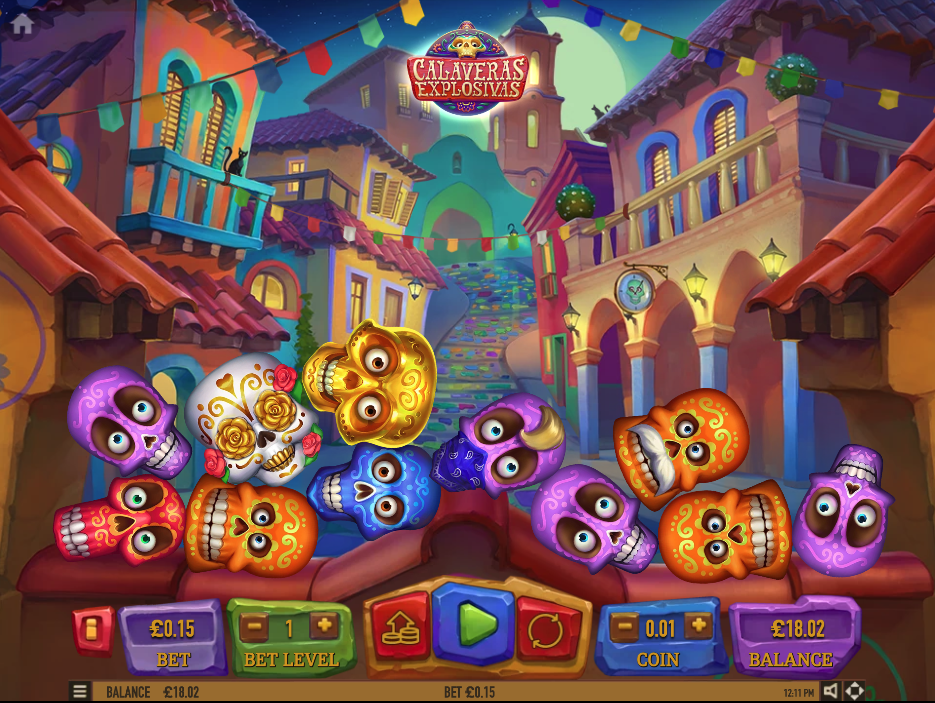 The Mexican Day of the Dead has provided the theme for more than a few online slot machines and here’s an entry into that genre from Habanero Systems – it’s called Calaveras Explosivas (Explosive Skulls) and it takes the concept of tumbling reels to a new and interesting place.

Calaveras Explosivas takes place on the playing area you can see above and at first glance there doesn’t appear to be any structure to the gameplay as coloured skulls drop down in a disorganised fashion. However wins are formed when at least three matching skulls come to a stop touching each other – they’ll then disappear and be replaced by some more falling in from above, potentially continuing the process. Up to thirty symbols can fall on each spin.

Behind the falling symbols there’s a Mexican town getting ready for the celebrations as night falls on the cobbled streets. Traditional guitars provides the suitable musical accompaniment.

The symbols are all skulls in blue, green, purple, orange and red; the golden skull is wild and the white skull is the scatter symbol.

In any spin the win multiplier will increase with each successive tumble:

When there are no more tumbles the win multiplier resets back to 1x again.

Occasionally a skull will land with some slightly different eye socket coverings and if these appear in a winning combo the win multiplier is increased by 1x. Each of these symbols will add their own multiplier so two or three would increase the total multiplier for that combo to 3x or 4x.

This multiplier will then be applied to the cascade multiplier for some potentially big wins.