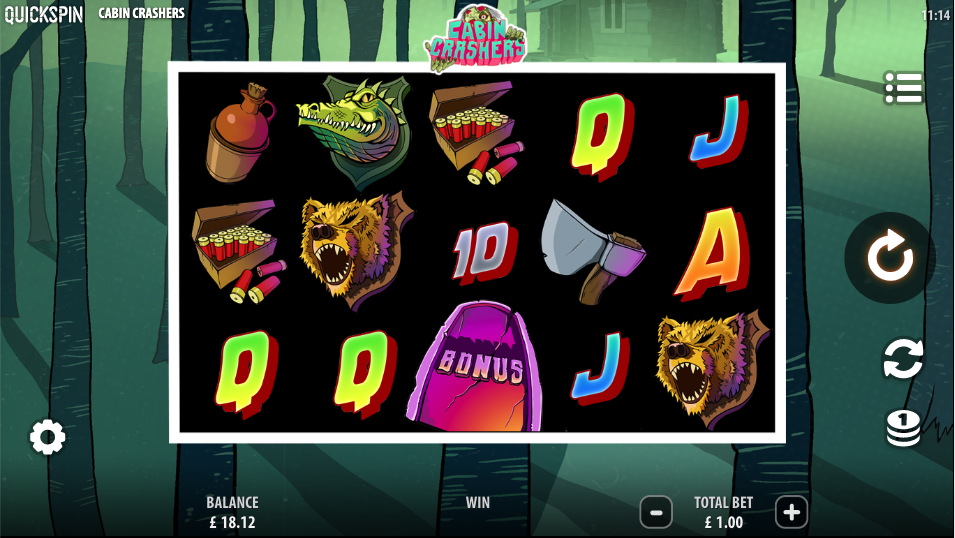 There’s a cabin in the woods and it’s under attack by zombies in this online slot from Quickspin Gaming – it’s called Cabin Crashers and from £0.20 per spin it offers players multiplier wilds and four different modes in the Zombie Siege free spins.

Cabin Crashers is a five reel slot with three rows and twenty fixed paylines; there’s an attractive and stylistic design to this game and a soundtrack which seems to combine some foreboding drums with Irish folk music.

The high value symbols include hunting trophies – the chainsaw mask, the bear and the alligator – along with a box of shotgun cartridges, an axe and a jar of hooch; 10, J, Q, K and A represent the lower values. The wild is the boarded-up window, it appears on reels two, three and four and it comes with a win multiplier of between 2x and 5x in the base game; the gravestones are the scatter symbols.

This is triggered by landing three of the gravestones anywhere on reels one, three and five; you’ll now get to pick from one of the following options:

Any wild symbols which land during this feature will stick in place until the spins end.