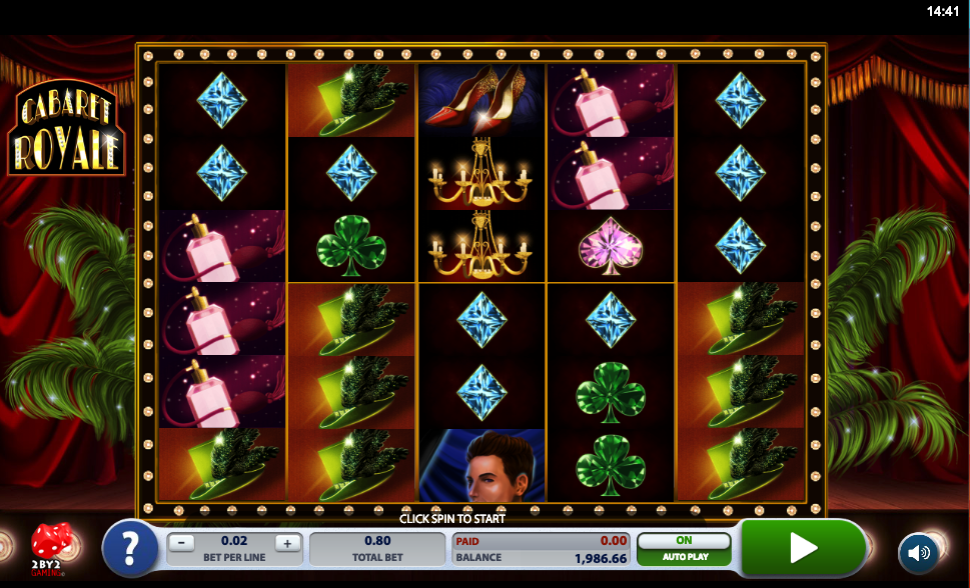 The glamour and the style of a night at the theatre is the theme of Cabaret Royale, an online slot from 2By2 Gaming with an interesting reel structure and several themed features to enjoy – find out how it all works below.

Cabaret Royale looks like a five reel slot but in fact it has eight reels – the middle three are divided into top and bottom halves and spin independently of each other; there are a total of sixty paylines.

There’s a gentle piano soundtrack to proceedings which take place on a spotlit set of reels with the plush, red curtains and golden tassels of the stage forming the classy backdrop.

All the high value symbols are related to the theme and include the female and male performers, a chandelier, a pair of high-heeled shoes, perfume and a green top hat; jewelled playing card symbols represent the lower values.

The blonde performer is wild and she will replace all others symbols to help form winning matches except for the bonus icon; she can appear stacked on reels one and eight and as a mini-feature a full stack on reels one or eight may copy itself across to the other, distributing a couple of single wilds on the centre reels along the way.

This may be triggered in the base game whenever you land a win worth at least 5x your total bet after which you will receive an ‘encore’ – twice the original win amount.

Trigger this by landing three, four, five or six of the bonus symbols anywhere on reels two to seven (the middle ones) and you’ll get 8, 10, 12 or 15 free spins respectively. You’ll be offered three options to enhance those spins:

More spins can be earned by landing the required number of bonus symbols again during this round.

Cabaret Royale may not be that close to experiencing the real thing but it’s a slot which comes with a touch of class and an innovative reel structure which takes a bit of getting used to; there are plenty of features to aim for and an engaging atmosphere to enjoy.