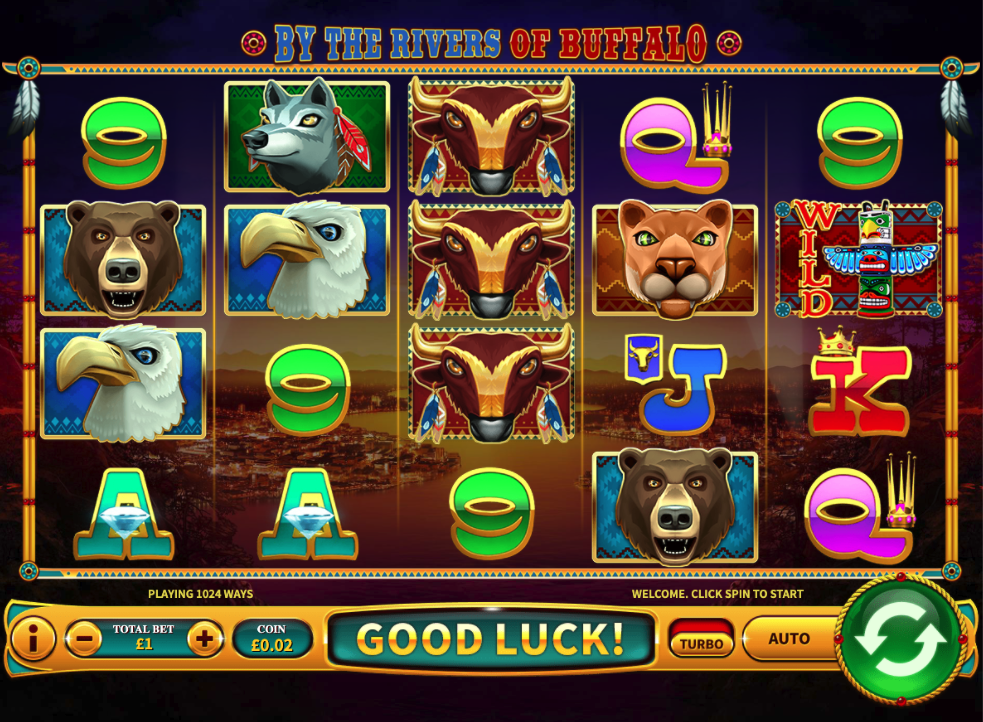 The city of Buffalo in New York State is the setting for this online slot from Skywind but it’s also influenced by the animals and the Native American culture of that region – it’s called By The Rivers Of Buffalo and it tempts players with free spins and multipliers.

By The Rivers Of Buffalo is a five reel slot with four rows and 1024 ways to win – there’s no payline structure here and wins are formed as long as there are matching symbols on adjacent reels starting from the left hand side. Behind those tribal reels there’s a view of the city straddling the Buffalo River.

The buffalo head is the most valuable symbols and worth 300x the stake for five on a payline – it can also appear stacked on reels two to five; other high value symbols include the mountain lion, the eagle, the wolf and the bear. 9, 10, J, Q, K and A represent the lower values.

The Totem pole is wild and not only will it substitute for all symbols apart from the gold disc but it will also double any wins to which it contributes,

By The Rivers Of Buffalo Bonus Features

Landing three, four or five of the gold disc scatter symbols anywhere in view will award an initial 7, 14 or 21 free spins respectively but the trick here is to try and retrigger more spins in the same way because you’ll then get a load more spins with a win multiplier attached:

The one caveat is that you’ll only get the multiplier if you retrigger the same number of spins that you won the first time round.

We like the idea of a slot based in a particular city and Buffalo seems as good a place as any – the free spins and funky graphics are very welcome but the big wins come in the retriggered bonus round.