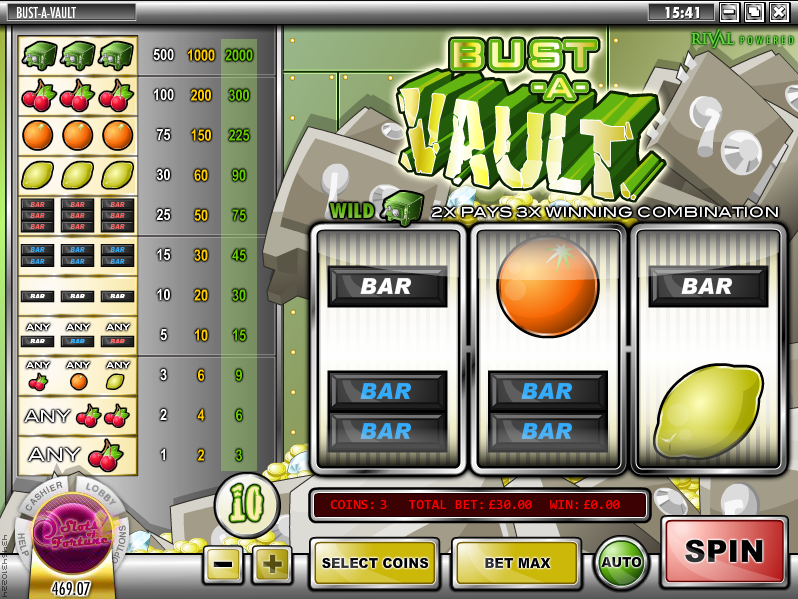 We’re in the mood to play three reel online slots at the moment so why not have a gander at this simple but enjoyable release from Rival Gaming. It’s called Bust-A-Vault and if you can hit the jackpot here then the vault will be blown wide open and the contents will be yours.

Bust-A-Vault is the simplest type of slot and has just three reels and one payline; those large reels are set to the right of the screen on top of a pile of vaults in various states of closure. You can just glimpse diamonds and gold coins at the base of the screen window. The informative paytable sits off to the left and provides the player with all he or she needs to know about their possible winnings.

The symbols will be mostly recognisable to regular players and include cherries, lemons, oranges, single/double/triple bars and then the green vault itself. That vault is wild and also the highest paying icon, worth up to 2000x your stake. A winning combo which contains a wild will be subject to a extra multiplier.

You can win with one or two cherries anywhere on the payline and you can also win with three combined fruit or three different coloured single bars.

It’s all fairly self-explanatory so first pick your coin size between £0.10 and £10.00; then choose your coin size – there are three levels which allow you a maximum wager per spin of £30.00

There’s an extra advantage to using three coins in that the only possible way to hit the maximum jackpot of 2000x your stake is by playing with the maximum coin level. The prize is double the win for those playing with two coins.

Rival’s three reel slots have an engaging simplicity about them and they’re designed in a nice clear way which makes you want to keep spinning those reels. The wild symbol makes an unexpected but welcome addition to the proceedings.