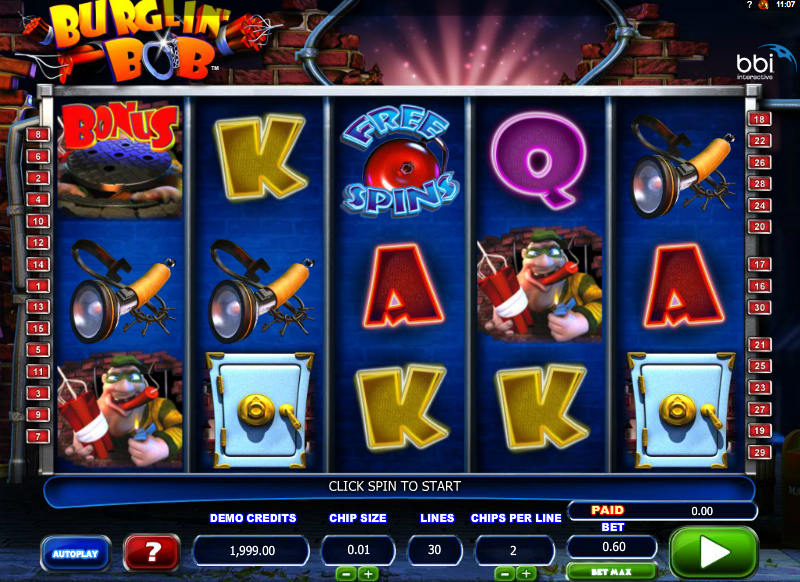 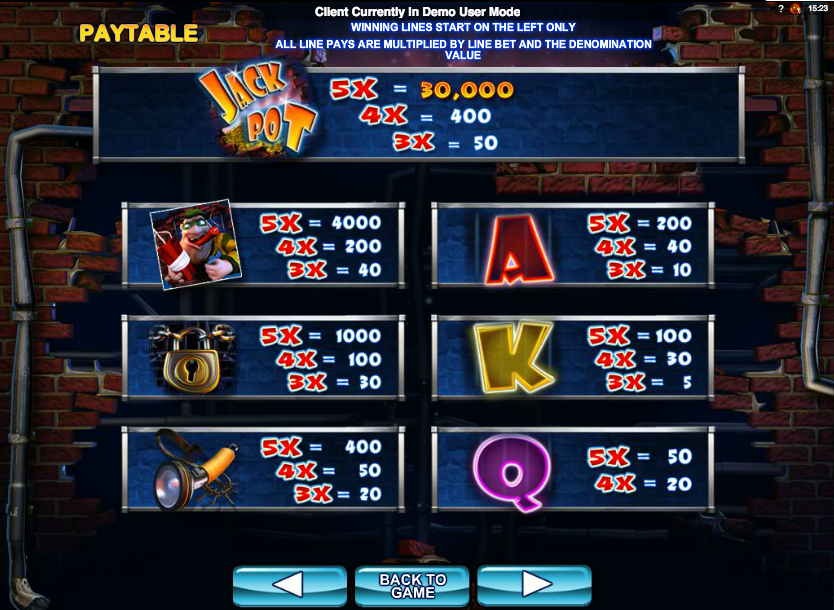 Burglin’ Bob is a brand new online slot from a developer called Bluberi Gaming Technologies about which we know very little so it will be interesting to see what else they produce in the future. The omens are good if they are all as engaging as this offering – Burglin’ Bob is a feature-packed with some great graphics and animations so read on to find out more.

Burglin’ Bob is a five reel and thirty payline slot and Bob is of course our anti-hero here; he’s a miscreant who spends his time robbing shops, breaking into safes and looking like a stereotypical thief.

The symbols are a cheerful-looking bunch with the lower values represented by Q, K and A while the higher values are a torch and keys, a locked padlock and Bob himself, wielding some sticks of comedy dynamite. The jackpot symbol is worth 30000x the line bet for 5 on an active payline.

Bob’s fierce dog is the wild, there’s a free spins icon, a safe and a manhole cover which activate the various features.

You will need to land three of the manhole covers anywhere on reels one, three and five to trigger this feature and it’s a game in which you need to pick from the displayed icons until you find three matching amounts, which will be your prize.

If you are lucky enough to find three of Bob under a manhole cover you will trigger the Smash ‘N’ Grab bonus in which you get to raid four shops, grabbing worthwhile prizes from each. You may also win the chance to break into more shops.

Land the Free Spins symbols anywhere on reels two, three and four to trigger this feature. You will the be asked to choose one of those symbols which will reveal the number of spins awarded up to a maximum of 60.

All your wins here will be subject to a 2x multiplier and it’s possible to re-trigger them while in this phase.

You will need to land three or more safes consecutively on an active payline to earn this feature and it’s a fairly brief one – all you need to do is pick one of those safes for a cash prize.

If you’re playing this game for the features then make sure you have the paylines maxed out because that will give you the best chance of triggering the Safe Bonus.

Bricks and mortar casino visitors may well have seen this game before and that’s because it’s a conversion from a physical machine. The good news is that it’s just as enjoyable with lots of constant action and plenty of bonus features.