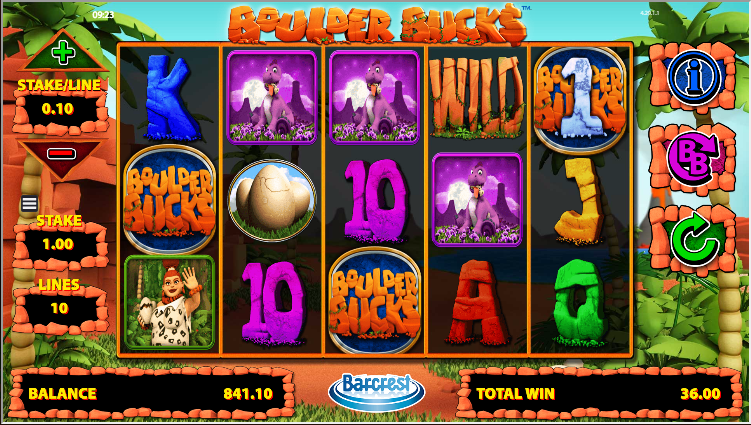 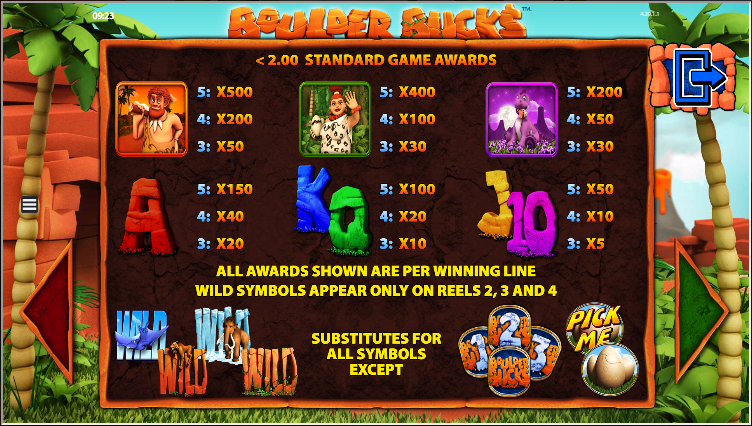 Did stone age dwellers of the Earth use any sort of currency? Did they coexist with dinosaurs? Put all those awkward questions to one side for the moment so you can enjoy this colourful online slot from Barcrest. It’s called Boulder Bucks and it includes several extra features as well as Barcrest’s Big Bet option – read the full review below for all the essential information.

Boulder Bucks is a five reel slot with three rows and ten fixed paylines; the game is set in some sunny prehistoric location where the main characters live in the shade of the palm trees alongside a pink dinosaur.

The three main symbols are in fact the make and female characters along with that dinosaur; lower values are represented by the ‘boulderised’ 10, J, Q, K and A.

The wild is a big wild boulder which appears only on reels two, three and four and it will substitute for all others except the bonus symbols – the Boulder Bucks logo and the dinosaur egg.

This is triggered by landing three of the Boulder Bucks logos anywhere on reels one, three and five; the symbol on reel five will then determine how many picks you get (1-3) of the following three choices:

Trigger this by landing three of the dinosaur eggs anywhere on reels two, three and four; just pick one of these eggs for a multiplier prize or entry into the free spins round.

This is an optional special bet which will cost 20 or 30 coins depending on your choice:

Boulder Bucks is a colourful and enjoyable slot with several easily-triggered bonus features and that extra option to buy yourselves some enhanced spins. It’s a game we would certainly recommend.