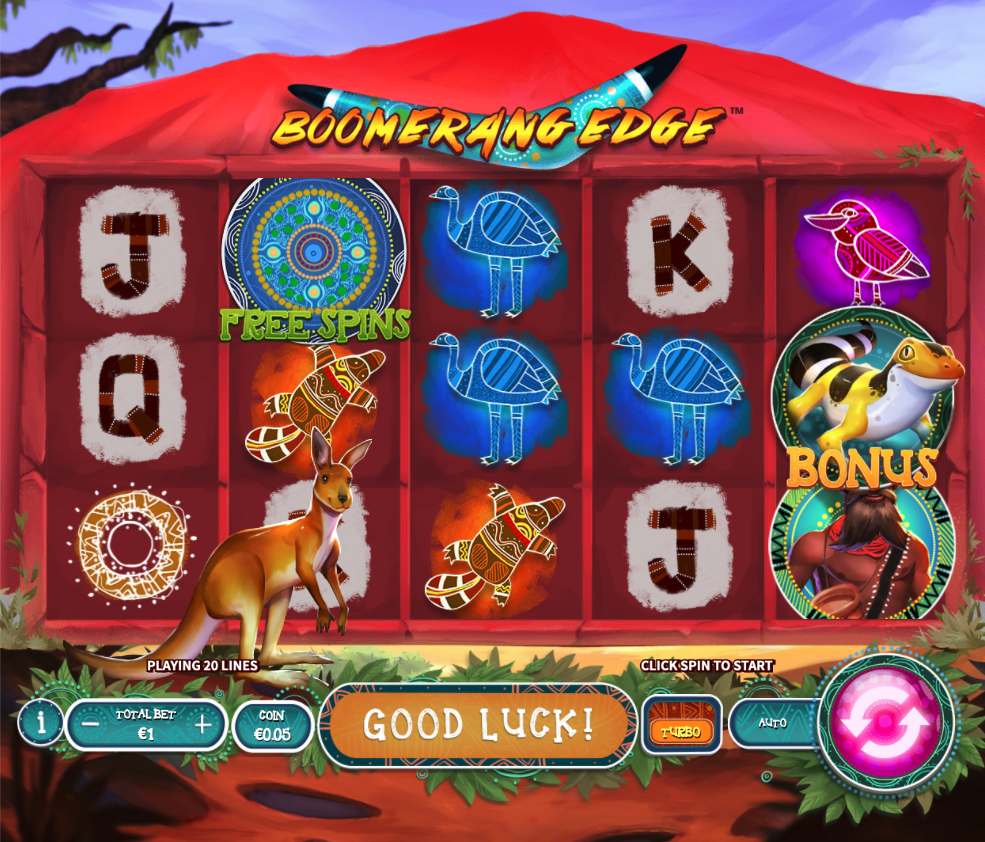 It’s time to fire up the camper van to start a very long drive into the Australian outback in the company of Boomerang Edge, this online slot from Skywind themed on Aboriginal culture and offering players free spins, wild multipliers and the Kangaroo Jumping Wild feature.

Boomerang Edge is a five reel slot with three rows and twenty fixed paylines; the gigantic lump of rock which is Uluru fills the backdrop to the reels and the gameplay is accompanied by a suitably Australian soundtrack.

Four animals in a Dreamtime style make up the higher values and they are the two birds and the two mammals and they are joined by the wheel; J, Q, K and A make up the lower values. The kangaroo is wild and it will replace all standard symbols to help form winning combos; the chap with the boomerang, the blue circle and the lizard are the bonus symbols.

When the man with the boomerang lands on reel three he’ll chuck the boomerang away from the reels – now count the spins until the boomerang returns and that number is the multiplier value attached to the win on the current spin.

Landing at least three of the blue circle bonus symbols anywhere in view will a random number of spins up to twenty five; the spins can be retriggered during this round and more wild kangaroos will be added to the reels.

A wild kangaroo which lands on reels one or five may move across the reels over the next few spins, adding extra wild symbols every now and again.

This is triggered by landing at least three of the yellow lizard anywhere in view – you’ll now get to play a picking game which will award cash prizes and multiplier values until you pick the Nature Spirit which will end the game.

Boomerang Edge is a slot which takes us away from the usual Australian stereotypes and introduces some very welcome Aboriginal culture into the mix; the action is fast-paced, the bonus features are numerous and the graphics are bright and cheerful.