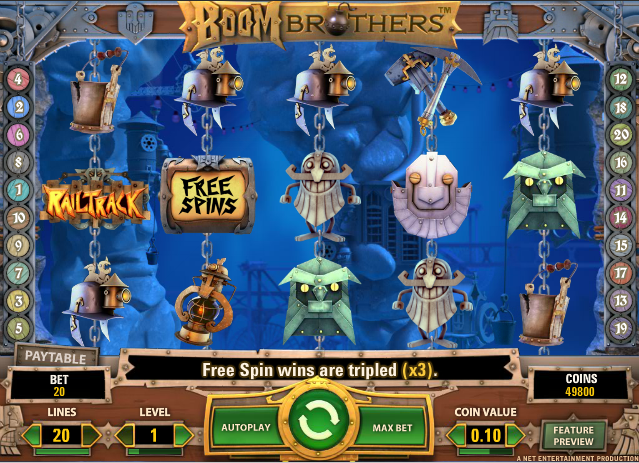 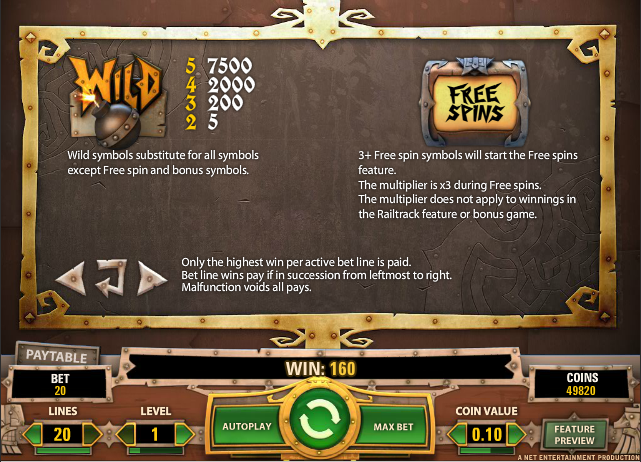 We’re always happy to review a new Net Entertainment online slot and we’re happy to say that Boom Brothers maintains the quality we’ve come to expect from this innovative company.  This slot is set deep underground where a selection of characters mine gold, rubies and diamonds from huge caverns.

This five reel and twenty payline slot is extremely mechanical in nature and cogs turn slowly above the reels to the right and the left.  The reels themselves contain symbols linked together by chains as if the symbols are disappearing continually into the depths of the earth.

All the symbols are related to mining and include a miner’s helmet, a bucket, a pickaxe & hammer, a lantern and metallic representations of the Boom Brothers themselves.  Special symbols include a ‘railtrack’ symbol which activates the bonus game, a ‘free spins’ logo  and a fizzing bomb wild.

This is the sort of feature that tends to mark Net Entertainment out as one of the more creative slots developers; on each spin there’s a random chance that one of the Boom Brothers will race out onto the screen and spin one of the reels again or perhaps explode a symbol to let another fall into it’s place.  Don’t rely on it to win money but it does seem to happen quite regularly.

Landing three of the free spins logos anywhere on the reels will unsurprisingly activate the free spins round.  When you manage this the symbols will spin and reveal numbers which will total between 8 and 50 and that’s the number of spins you’ll receive.

There’s a 3x multiplier for any prizes won here and each time you land another free spin symbol you’ll get one more spin.  You can also re-trigger the free spins while playing them by landing three more bonus symbols.

Three railtrack symbols on an active payline will gain you entry into this mini-game; the first part is to help the dwarf cross the reels on his cart by landing pieces of track on reels four and five.

The second part shows the three dwarves on three tracks separated vertically.  Your task is to click one of the three carts at the bottom of the screen to reveal a gold bar, a ruby or a diamond and the number of places to move.  Each precious metal moves one of the dwarves across the screen and the first to arrive grabs the prize which is handed on to you.

This is a typically addictive and entertaining Net Entertainment game which adds some welcome humour into the mix.  It’s well worth trying out on a rainy afternoon or perhaps even a sunny one!