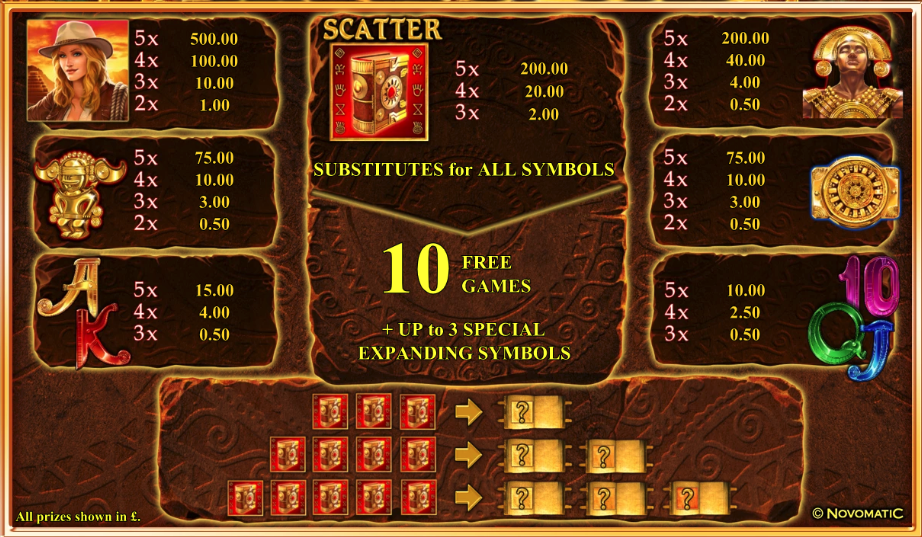 The Book of Ra series of online slots from Novomatic/Greentube seem to be reproducing at an increasingly fast rate and the latest one from this famous development studio is Book of Ra Temple of Gold, a game which takes us to an Aztec while tempting players with free spins and expanding symbols.

Book of Ra Temple of Gold is a five reel slot with three rows and ten fixed paylines; the trappings of this golden temple surround those reels while the glow from this precious metal lights up the entire scene.

The high value symbols include the intrepid explorer, Aztec statues and other golden artefacts for your pleasure; 10, J, Q, K and A represent the lower values.

The gold-fringed Book of Ra is both the wild and the scatter symbol and it will substitute for all others to help form winning combos – it’s also the key to activating the main feature.

Landing at least three of the Book of Ra wild/scatter symbols will award ten free spins but more can be triggered by landing another three Books of Ra during this round.

Before the spins start up to three standard symbols will be selected at random and when these land they will expand to fill their entire reel; it doesn’t matter which reels they’re on because they’ll pay out on the paylines they occupy anyway – they’re not quite a scatter symbol but could be described as the next best thing.

There’s nothing particularly wrong with Book of Ra Temple of Gold but it doesn’t add much to this series of games which is already available to play; we’re also a little confused by the appearance of Egyptian gods in Central America.