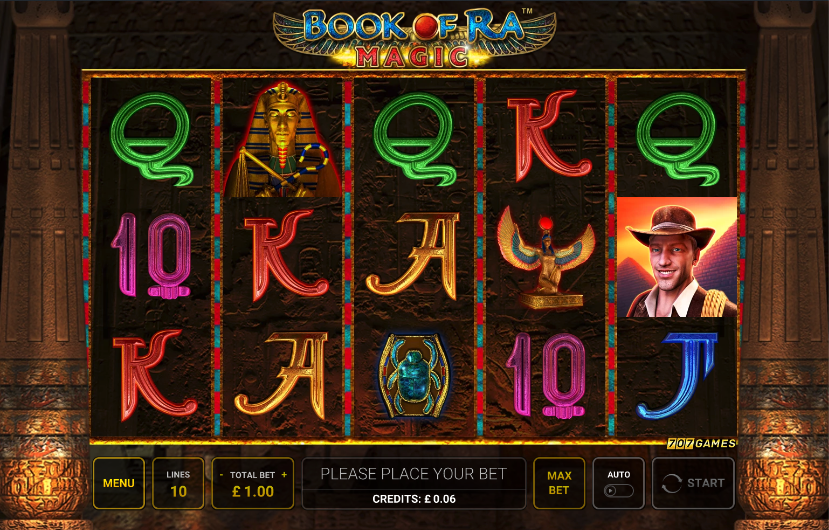 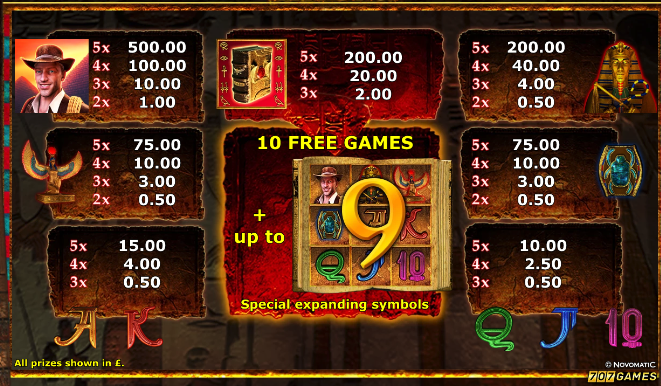 The theme of Egypt is a common one in the world of online slots and that genre contains Novomatic’s Book of Ra series of games; Book of Ra Magic is the latest addition to this lineup and as well as the usual Egyptian gods it offers players free spins with giant symbols.

Book of Ra Magic is a five reel slot with three rows and up to ten paylines; the look and feel is similar to its predecessors with those reels spinning in front of dimly lit columns covered with hieroglyphics.

Our intrepid hero (or grave robber, depending on your interpretation) is the highest value symbol and worth 500x your stake; others include a blue scarab and a golden sphinx mask. 9, 10, J, Q, K and A make up the lower values.

The Magic Book is both the wild and the scatter symbol and it will substitute for all others to help form winning combinations.

This round is triggered by landing at least three of the Magic Book wild/scatter symbols anywhere in view for which you’ll receive an initial ten free spins.

Before the round starts one standard symbol will be selected at random to appear as large, 3×3 icon when it appears. The good news is that if you can retrigger the spins with three more scatters then that large symbol will remain in place and another will be chosen to join it. For the very lucky players it’s possible to have up to nine large symbols in play.

Book of Ra Magic doesn’t differ greatly from its predecessors but this is a popular series and a winning formula so why change it too much; in this game the free spins round is where the magic happens.