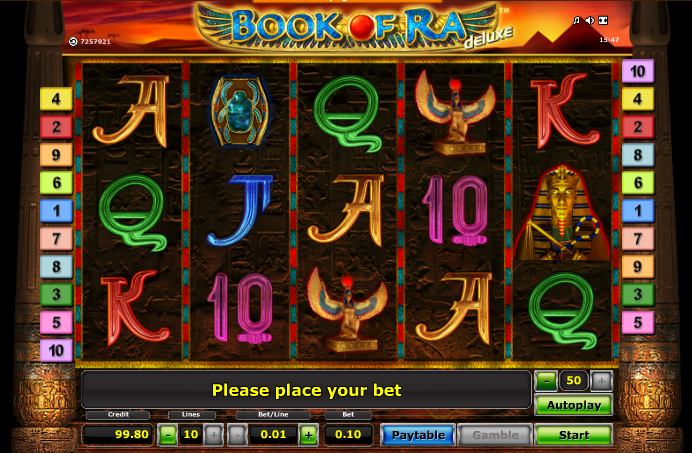 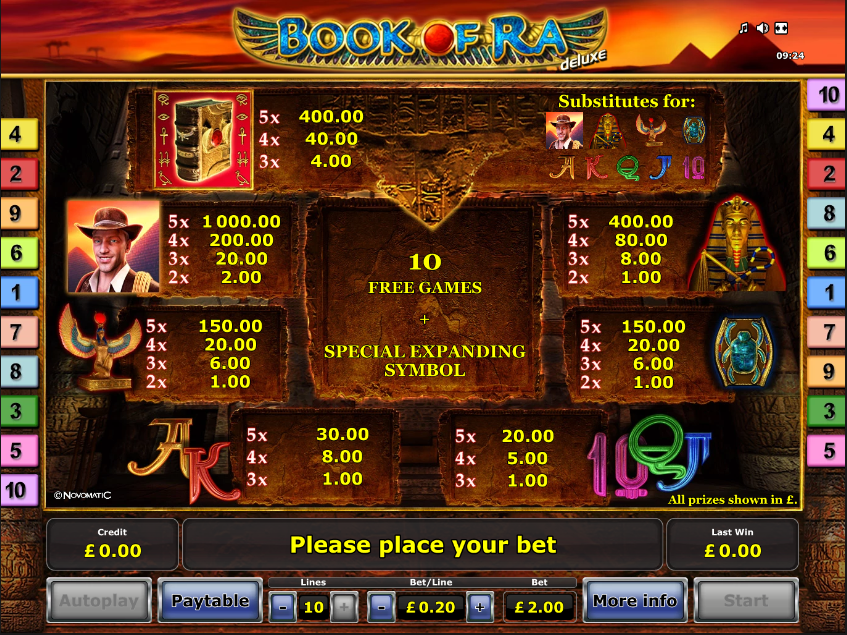 Book of Ra Deluxe is one of those wildly popular online slots which successfully made the jump from bricks and mortar casinos to our desktops and mobile devices.  Novomatic is the manufacturer behind this slots phenomenon so we though we’d check it out in our usual thorough manner to save you the trouble.

Book of Ra is a relatively basic game but one which looks so good and plays so smoothly that even if it had no bonus features it would still be an addictive gaming experience.  It features five reels and just ten paylines and the narrative is one of Egyptian adventure and archaeological discovery.  Hieroglyphics adorn the columns which frame the screen and above the reels we can see the sun setting behind the pyramids.

The main symbols include our adventurer plus various Egyptian artefacts such as a blue scarab, a statue and a sarcophagus.  Minor symbols are the standard 10, J, Q, K and A but in a hieroglyphic style.  The spinning Book of Ra itself is both the wild and the scatter symbol and it will trigger the bonus feature.

Ten free spins await you if you are lucky enough to land three or more of the Book of Ra scatter symbols anywhere on the reels; additionally you will have the benefit of an expanding symbol and this will be randomly chosen from one of the regular symbols at the start of the feature and if it’s involved in a winning combo it will expand to cover it’s reel entirely.

If you’d like to gamble your most recent win in a 50/50 game of chance then just click the ‘Gamble’ button following your win.

You will now get to take part in a mini-game in which you predict whether the next playing card revealed will be red or black.  A win will double your money but as soon as you make the wrong choice you’ll lose it all and be sent back to the base game.

It’s easy to see why this is such a popular slot; the sounds and the game mechanics are extremely similar to the land-based version of the game and the movement of the reels is a joy to watch.  There may only be one bonus game but the expanding wild makes it a profitable and enjoyable one.