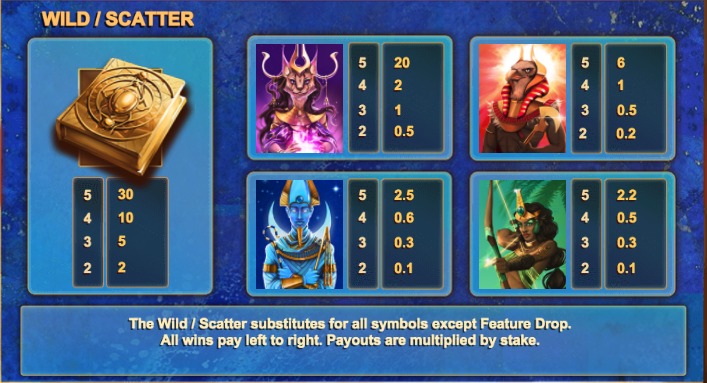 Clear blue skies, pyramids and hieroglyphics must mean that we are returning to Ancient Egypt once more to check out this online slot from Big Time Gaming; it’s called Book of Gods and it comes with various themed features.

Book of Gods is a five reel slot with three rows and two hundred and forty three ways to win and in this game paylines can be formed anywhere on the reels as long as there are at least two or three (depending on the symbol) in adjacent reels. Those reels float in front of a scene featuring gently rippling water with pyramids in the distance.

The four higher value symbols are all gods best identified here by colour – purple, red, blue and green; 9, 10, J, Q, K and A make up the lower values.

The wild and the scatter are the same symbol – the Book of Gods – and it will replace all others to help form winning combinations.

On each spin the book to the left of the reels will reveal one of the lower value symbols; if this symbol is involved in a winning combo on that spin it will then expand to fill all positions on its reel for some extra payouts.

This is triggered by landing three, four or five or more of the wild/scatter symbols anywhere in view for which you will receive 15, 20 or 25 free spins respectively; during this round one of the god symbols will be selected as the clone until the spins end.

It’s possible to trigger more spins by landing three more wild/scatters and each time you do another god will be cloned; after three retriggers all gods will therefore be cloned.

The Feature Drop option lets players purchase the feature for the amount shown above the ‘Buy’ button; this is proportional to your stake but each BTG symbol which lands on the reels will reduce it slightly. If it reaches zero the feature is triggered anyway.

Book of Gods is a very enjoyable slot with those clever little touches which mark out releases from Big Time Gaming; the Symbol Cloning hits regularly and we always like the ability to buy your way into the main feature.