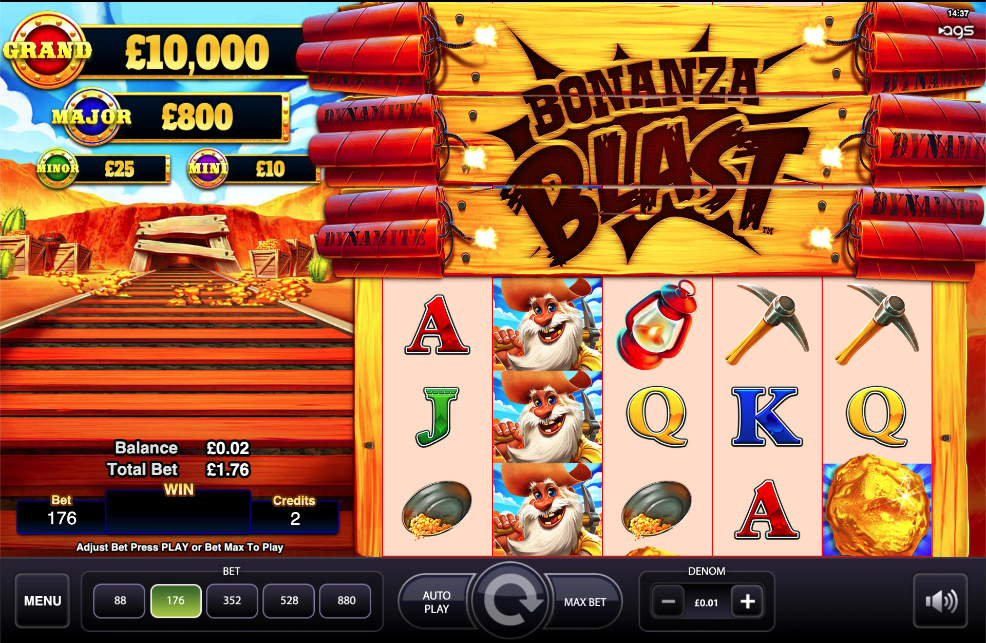 The cheerful prospector who’s the principal character in this online slot from AGS looks happier than one might be after a hard day digging for gold underground – he’d surely have been better off firing up his Victorian laptop and trying out Bonanza Blast as a less risky way to make some money.

Bonanza Blast is a five reel slot with three rows and the PowerXStream payline structure which means wins can be formed as long as there are matching symbols in adjacent reels starting from the left hand side. The jackpot prizes and the mine entrance are to the left of those reels while the dynamite are above them will come in handy later.

The theme-related symbols include the prospector, a cart full of gold, a lamp, a panning dish (Why? he’s down a mine!) and a pickaxe; 9, 10, J, Q, K and A make up the lower values.

The sticks of dynamite are wild, they appears only on reels two, three and four and they’ll replace all standard symbols to help form winning matches; the nugget of gold is the scatter symbol.

This is where you’ll get a shot at winning the big numbers on the left hand side and your chance may be triggered if a wild symbol lands on the reels in the base game; you’ll be prompted to pick from twelve objects to find three matching symbols which corresponds to one of the prizes.

This is randomly triggered in the base game and an extra row or rows may be added in the area above the reels, increasing the number of possible paylines.

Landing at least three of the gold nugget scatter symbols anywhere in view will award ten free spins; it’s not possible to trigger any more spins from within this round but if the Bonanza Blast triggers the extra rows it creates will stay in place until the feature ends.

If you’ve played slots such as Pharaoh Sun from AGS then the gameplay and feel of Bonanza Blast will be familiar but that’s Ok – it’s a cheerful and entertaining diversion with some jackpot prizes and the Bonanza Blast feature which makes winning more likely. Give it a go!