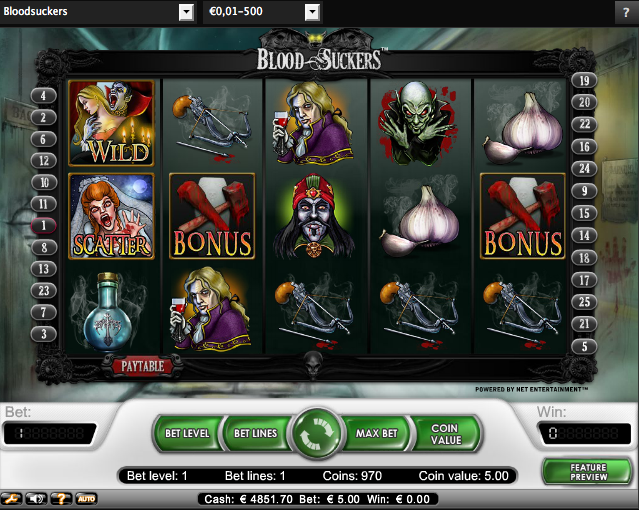 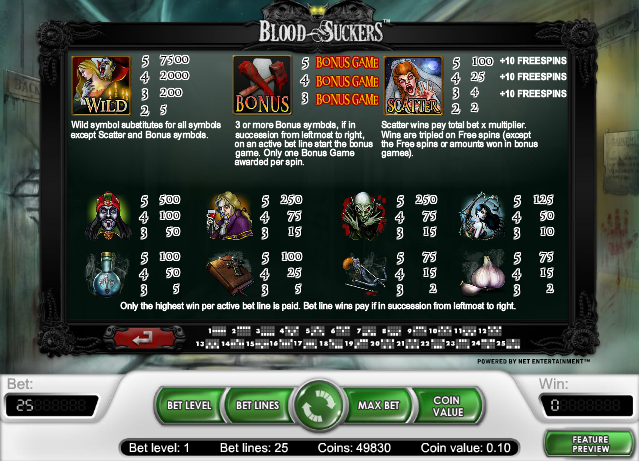 If you’re a fan of horror films than an online slot machine based on the genre is probably right up your street.  Bloodsuckers is a game which will appeal to horror buffs and slots fans alike and it’s from the ever-reliable Net Entertainment, designer of many quality games.

It’s a five reel and twenty five payline slot and it’s also worth saying that Bloodsuckers is something of a throwback to the Victorian idea of horror characters; the name or course is a reference to Dracula and other vampire-like characters and every symbol is related to the genre.  There are no playing card symbols here but we do have garlic, a bow and arrow, a bible and a test tube as the lower value ones and the game’s four characters as the higher value symbols.  There is also a wild symbol featuring a vampire biting a girl, a scatter symbol of a scary bride and a bonus symbol of a bloodies hammer and stake. The background is an action packed scene of various monsters and their female victims.

Trigger this by landing three bonus symbols on a winning payline.  You will then be transported to a gloomy room where twelve unopened coffins are lying on the floor.  Your task is to click on the coffins in the hope of picking one containing a vampire.  If a vampire appears a stake will skewer it, earning you some money in the process.  As soon as you click on an empty coffin, bats will fly out and the round is over. The amounts you win are dependent on the stake you are playing with.

Ten free spins can be yours by landing three or more of the bride scatter symbols anywhere in view; all wins are tripled and it’s possible to re-trigger more spins with more scatters.

Bloodsuckers is an entertaining enough slot which is well worth a go; our one criticism would be that the graphics don’t quite meet Net Ent’s usual high standards but that doesn’t affect the gameplay. It has a very high RTP of 98.00%.