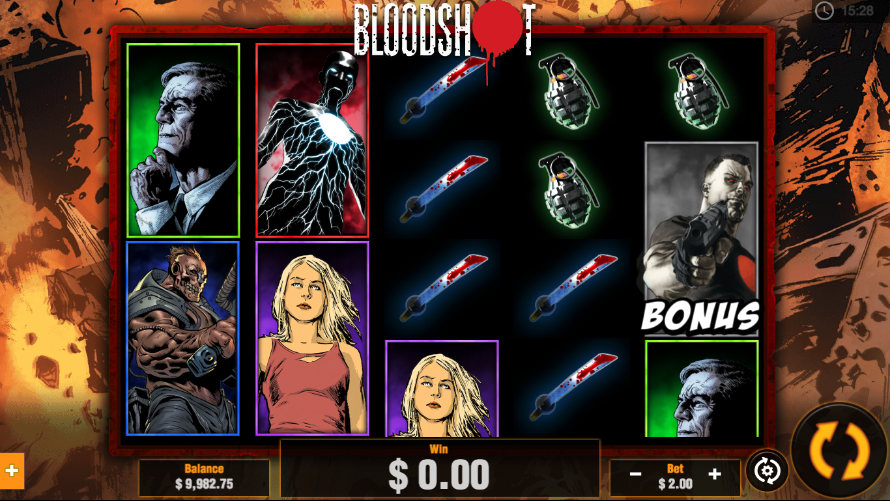 If you’re unfamiliar with Bloodshot, he’s the superhero who lives in the Valiant Comics universe and who uses the power of nanites in his blood for superhuman strength, speed and the useful ability to heal himself; in short he’s ideal as the subject for this online slot machine from Pariplay which comes with two bonus features.

Bloodshot is a five reel slot with four rows and forty paylines; the blood red reels float against a backdrop of comic book destruction and there’s an intriguing soundtrack which complements the theme very well.

The symbols are all related to the theme and we don’t really know who the characters are but we have a woman, an electric chap. a steroid freak with a giant gun and a gentleman in a suit; other symbols include a machine gun, a knife, some sort of claw weapon, a hand grenade and metal dog/cat.

The nanite symbol is wild and it will replace all others to help form winning combinations except for the Bloodshot bonus symbol.

This can occur randomly in the base game and several nanites will emerge onto the reels and turn up to 20 symbols wild, after which any wins are evaluated.

This is triggered by landing three or more of the Bloodshot bonus symbols anywhere in view – they’re two positions high and you’ll need to be able to see the whole thing.

You’ll now receive a spin of the Bonus Wheel which will determine one of the following awards:

Bloodshot is a very well designed game which sticks to the atmosphere and graphics of the original comic; there’s plenty of action on the reels, two bonus features to enjoy and an RTP of 94.66%.