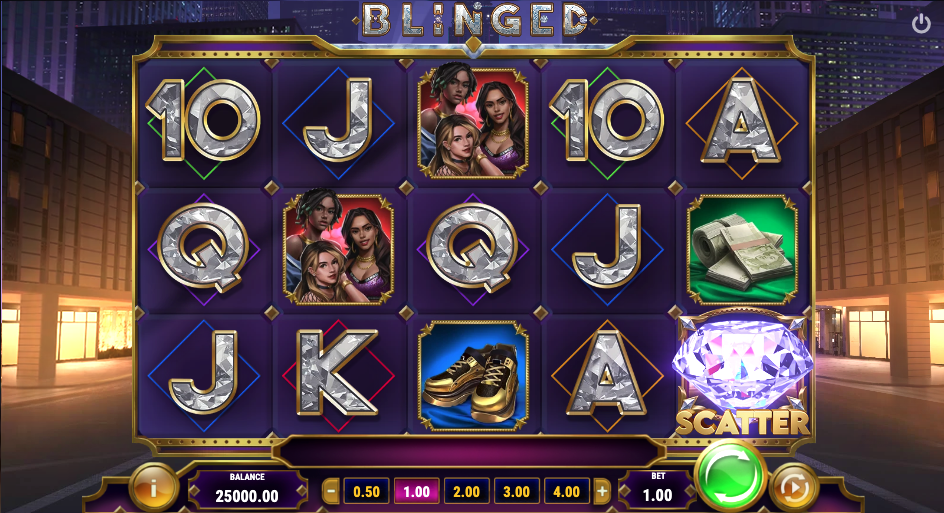 A world of diamonds, cash and terrible, gold trainers awaits those who like the look of this luxury-themed online slot from Play N Go – it’s called Blinged and it follows the fortunes of three girls about town in their quest for more money and Win Spins which guarantee a cash prize.

Blinged is a five reel slot with three rows and ten fixed paylines; the backdrop to those golden reels is a city street barely lit by the yellow glow of buildings sheltering beneath the towering skyscrapers.

High value symbols include one of our girls on her own, a group of three girls, a gold ring, a pair of awful, gold trainers and a pile of banknotes; 10, J, Q, K and A inlaid with diamonds make up the lower values. The girl with the baseball cap is wild and she’ll replace all other symbols except for the diamond scatter to help form winning combinations.

This is the only extra feature but it’s a good one and triggered each time you can land at least two of the diamond scatter symbols anywhere in view; you’ll receive the following:

A Win Spin is a spin in which a win is guaranteed so the reels will turn until that happens; each non-winning spin will increase the win multiplier by 1x with no limit so at this point you’d rather not win. There’s a maximum of twenty Win Spins available in the bonus round.

Blinged is a relatively simple but glitzy slot with a feature which triggers with a pleasing regularity; just set the Autoplay and watch as those lucrative diamonds land on the reels.