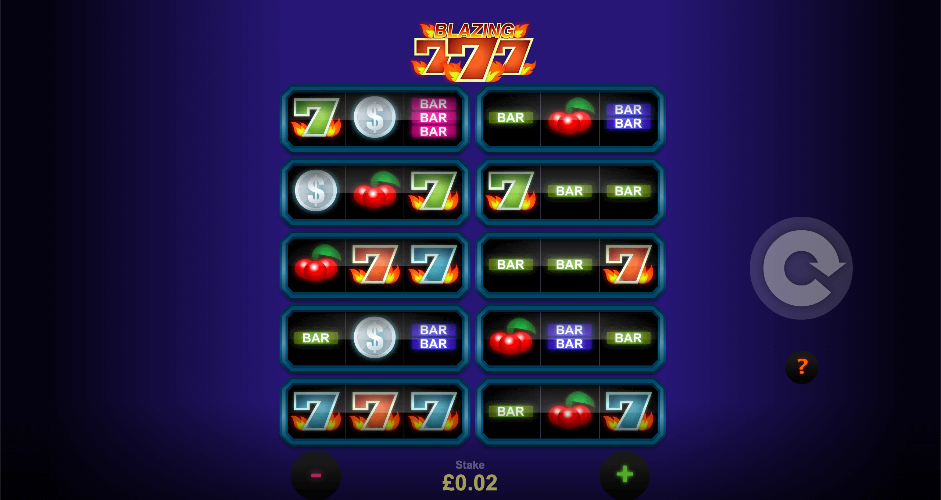 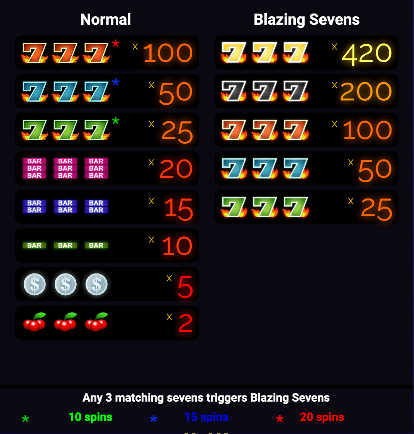 1×2 Gaming are an online slot developer with a reputation for designing something a little different and this release does is just that – it’s called Blazing 777 and you’ll get to play on ten separate reel sets with the chance to win the Blazing Sevens bonus feature.

Blazing 777 is made up of ten separate reels arranged in two rows of five with each featuring just the one payline and a quirky soundtrack which will accompany your gameplay as long as you can stand it. The design is simple with a dark blue backdrop providing the scenery.

The symbols will all be recognisable from your fruit machine days and include red sevens, blue sevens, green sevens, single/double/triple bars, silver dollars and of course cherries. There are no wild or special symbols in Blazing 777.

This is only really a minor feature but it can prove profitable all the same and it’s triggered whenever you land a winning combo of three matching sevens; depending on the colour of those sevens the subsequent spins will now offer the potential of bigger wins with some additional symbols:

Gold and black sevens are added to the reels during these spins and they are worth 420x and 200x the stake respectively for three on a payline; it’s probably also worth noting that these are not free spins, they’re just enhanced standard spins and you’ll still have to pay for them.

Blazing 777 is clever stuff because it’s a slot of great simplicity which manages to squeeze in an interesting bonus feature to keep things exciting; it should suit most players and it’s certainly worth a few spins.