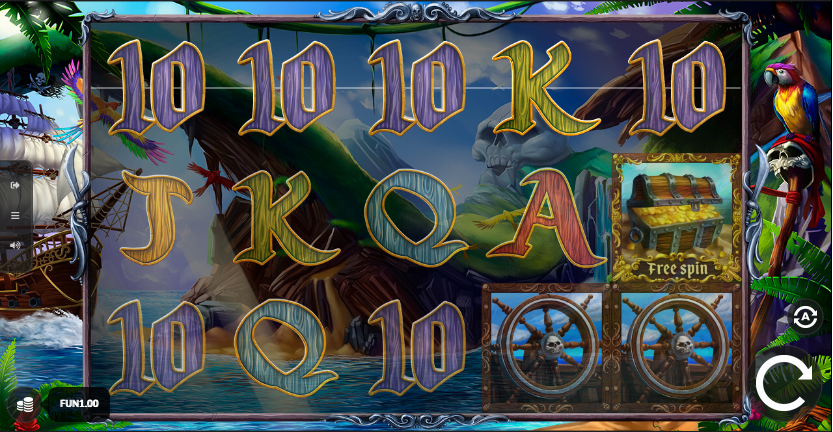 Edward Teach was one of the most famous and notorious pirates of the 17th and 18th centuries; he was perhaps better known as Blackbeard and it’s that name which lends itself to Blackbeard’s Compass, this online slot from 1×2 Gaming which promises players free spins, mystery symbols and a bonus trail feature.

Blackbeard’s Compass is a five reel slot with three rows and twenty five fixed paylines; behind those transparent reels there’s a colourful Caribbean scene of hilly islands, wildlife and what could be the Queen Anne’s Revenge approaching across the bay.

The higher value symbols include the pirate flag, the shps’ wheel, a scarred crew member, a female pirate and Blackbeard himself; 10, J, Q, K and A represent the lower values.

There’s no wild symbol in Blackbeards’s Compass but there are three special ones – the treasure chest, the pirate map and the compass.

The compass is the mystery symbol and whenever it lands it will transform into one of the standard symbols, hopefully helping out for a big win.

Landing three of the treasure chests on reels one, three and five will award ten free spins; the best bit about this round is that any mystery compass symbols which land on the reels will lock in place until the spins end, meaning that by the last few spins you could have a fair number of matching symbols in view.

Trigger this by landing three of the treasure map symbols anywhere on reels two, four and five; you’ll now get seven chances to progress around the trail, collecting cash prizes as you go.

While Blackbeard’s Compass may not be our favourite ever pirate-themed slot, it’s still a good one with three different features to enjoy; treasure, the Caribbean Sea, huge beards and free spins – what’s not to like?