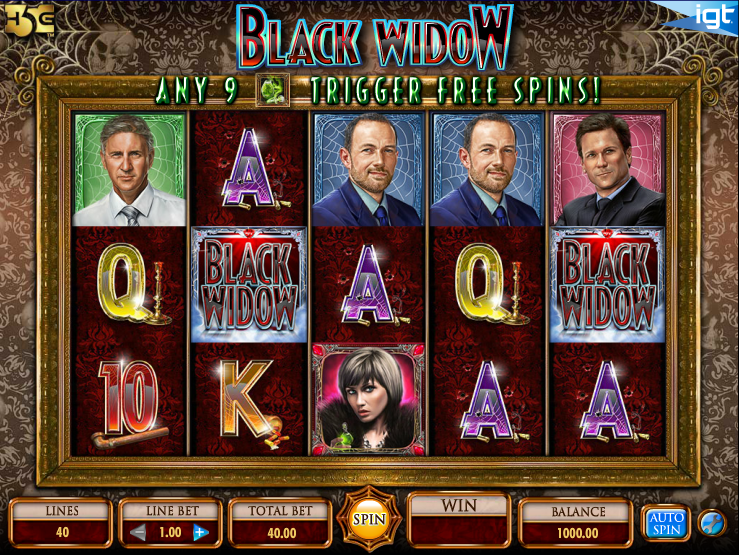 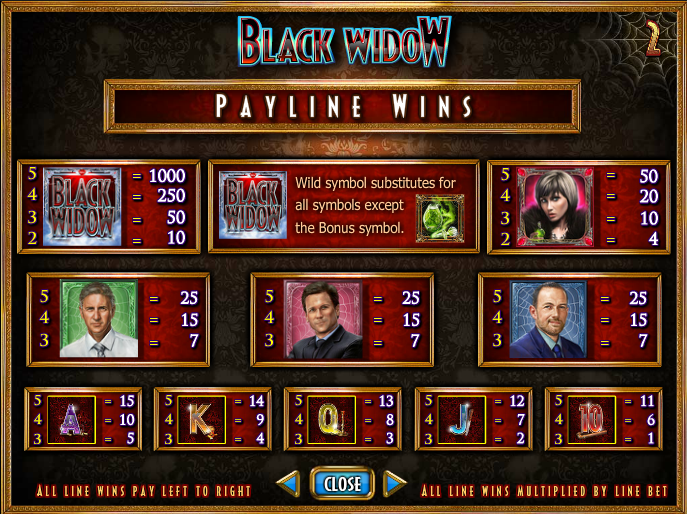 Arachnophobics need have nothing to to fear from this latest online slot from IGT; it might be called Black Widow but that’s a reference to scheming female lead in this story. That character is based on a number of notorious crimes throughout history involving women who have killed several men with aim of enriching themselves.

Black Widow is a five reel and forty payline game with something of a gloomy, gothic feel to proceedings. Spider webs hang above the reels which are set inside a gold-tinged picture frame. The standard playing card symbols represent the lower value symbols but the high value ones are the three potential male victims and the female black widow herself.

The Black Widow logo is wild and pays out the highest base game prize of 1000x your line stake while the green poison symbol is the bonus which will activate one of the features.

Before each spin, one of the symbols is picked at random and will appear stacked on the reels which means it can cover all positions on one reel. IGT calls this the Super Stacks feature.

The green poison bonus symbol only appears on reels two, three and four and you will need to fill up all positions on those reels to trigger this mini-game. Seven fee spins will now be yours but during this feature the Web Capture game becomes available.

During the free spins the idea is to ‘capture’ the male or female symbol in the centre position on reel three; each character has an associated multiplier which increases each time they are capture and that applies to the line bet. The female is slightly different in that capturing her will pay the combined multipliers of the other characters and increase all three.

The forty paylines are fixed so there’s not much to offer in the way of advice here; keep the sound on though and there’s no reason to avoid this game even if you’re afraid of spiders.

There’s lots to like about this game; it’s fair to say it’s quite tough to trigger the features but once you do they are fun to play. This is a game with a dark heart but it’s enjoyable to interact with.