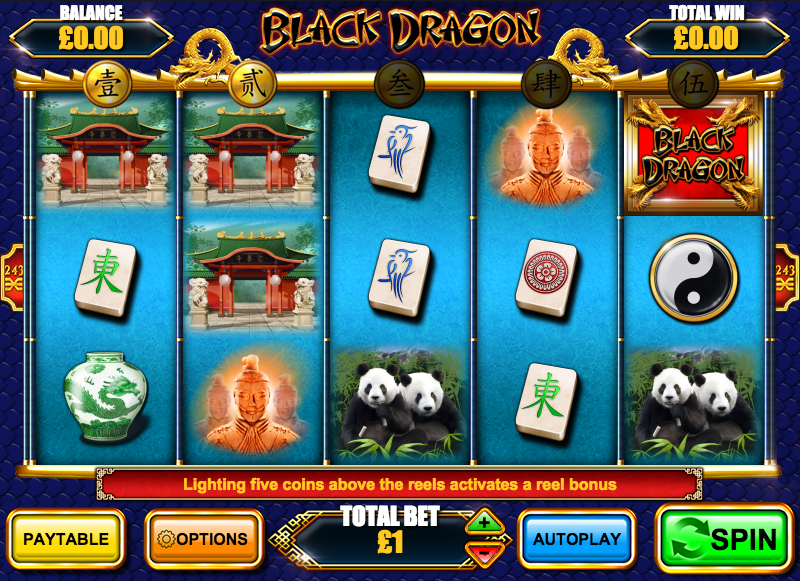 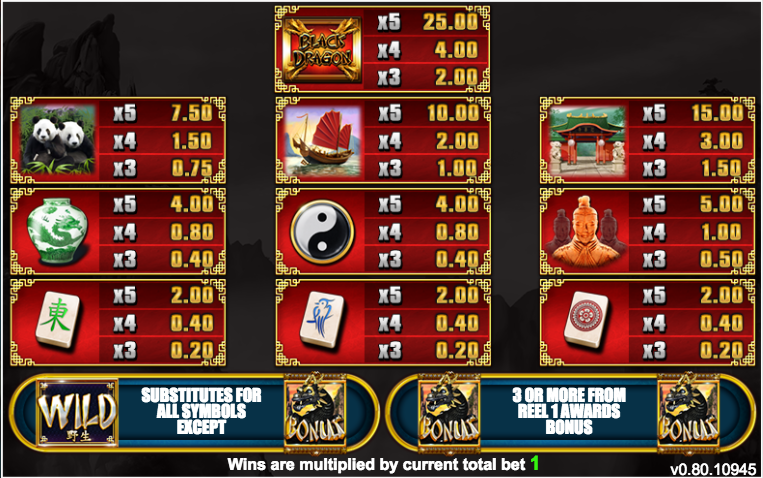 The mysterious and inscrutable Orient is once more our destination as we take a good look at this Chinese-themed online slot machine from Inspired Gaming; it’s called Black Dragon, it includes an enhanced free spins round and you can find our how it all works right here.

Black Dragon is a five reel slot with three rows and 243 ways to win – winning combos are formed as long as there are matching symbols in adjacent rows starting from the left hand side; those reels spin within a delicate gold and blue frame against a backdrop of dark blue.

All the symbols are related to the theme, they’re nicely designed and they include the Black Dragon logo, a pair of pandas, a Chinese junk, a temple gate, an ornate vase, a Yin Yang symbol, a statue of the Buddha and three tiles displaying characters and pictures.

The wild symbol is a big ‘Wild’ and it will replace all others to form winning combinations except for the Black Dragon bonus icon.

This is triggered by landing three, four or five of the Black Dragon bonus symbols starting from the left hand side for which you will receive 10, 15 or 20 free spins respectively. During this round any wilds which land will expand to fill the whole reel and remain there for one, two or three spins.

More spins can be triggered by landing three more bonus symbols, again starting from reel one.

Above the reels you will see that there are coins waiting to be lit; at the start of each spin two coins are lit up and if you can light the others by landing coins on those reels then you’ll trigger this feature. You will now get to select one of three chests which will award one of the following mini-bonuses:

Black Dragon is a playable-enough addition to the massed ranks of oriental-themed slots; it’s action packed with a nice soundtrack and an RTP of 94.86%.