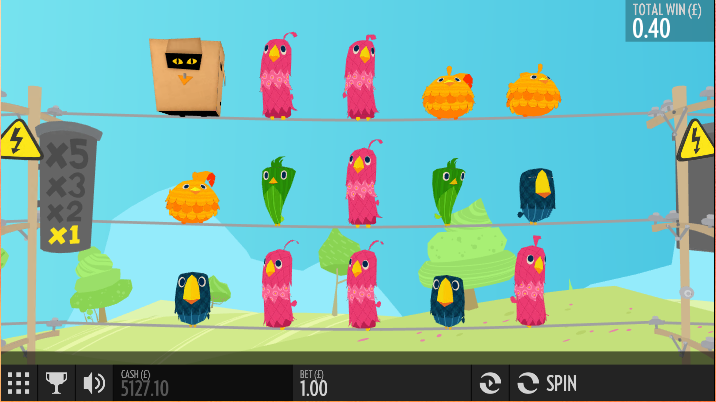 The level of competition is so great in the slots development industry that the search for creativity and innovation is constantly pushing new limits. A great example is this brand new game from Thunderkick; it’s called Birds On A Wire and from the moment you laid it up you know it’s something a little different.

Birds On A Wire is essentially a five reel slot with seventeen paylines but at the same time it’s so much more. The standard reels are replaced by three rows of five cute animated birds sitting on electric lines against the backdrop of fields, trees and a blue sky.

When you spin the reels you will move along to the next section of electric line where fifteen more birds will settle into place – that’s one spin and you can see it in action in the video above.

There are seven different bird symbol and we’ll describe them by colour – black, red, orange, blue, green, pink and brown.

The wild is a big. pear-shaped black bird and then there’s a cardboard box with a couple of eyes visible which is the scatter symbol.

Birds On A Wire Bonus Features

This occurs in the base game and the free spins and it happens every time you make a winning combination. The birds involved will be zapped into oblivion by the electric current and more birds will land on the lines in their place. A new combo is now possible and each successive win will increase the multiplier up to a maximum of 5x.

The cardboard box turns out to contain a cat and if you can land three or more anywhere in view he will reveal himself and scare the birds off to another set of lines where the ten free spins will begin.

Here the multipliers for any electrocuted birds are 4x, 8x, 12x and 20x so there are some decent wins available. After the ten spins are up you will get one final spin called the Inwinity Spin which carries on until you land a winning combo.

This is a fantastic new slot and it’s got everything we like in one package. The graphics, animations and sound effects are superb and the reel design is extremely clever. When more birds drop into the space vacated by a dead colleague it’s just like getting a free spin.