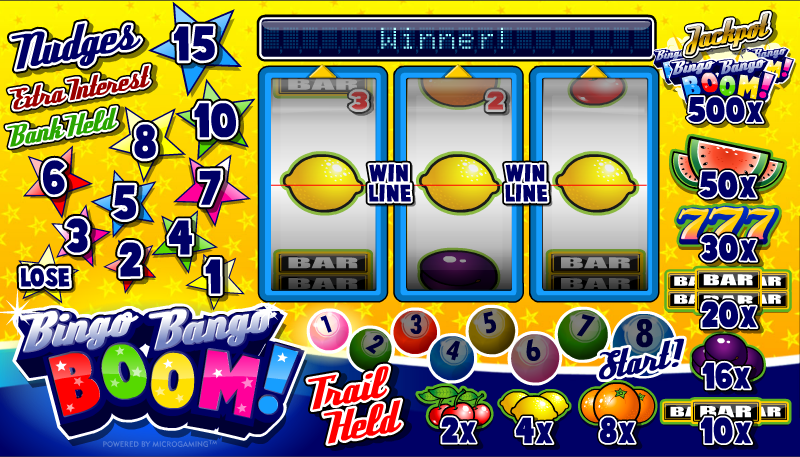 If you’re a UK player and looking to play an online slot reminiscent of a traditional fruit machine then Microgaming have a while range of games which should be right up your street. Bingo Bango Boom! is another addition to that line up and very entertaining it is too; the theme is of course bingo and there’s a bingo-related bonus feature.

Bingo Bango Boom! is a three reel and single payline slot based on that most popular of pastimes for a certain demographic.  All the symbols are the traditional cherries, lemons, oranges and the like although the jackpot of 500x your stake can be won by landing three of the game’s logos on the payline.

You can see some gameplay and the feature in the video below but essentially it’s an automatic game of bingo; numbered balls appear from the basket and they are ticked off on the eight groups of numbers at the top of the screen. The first group to be filled in is the feature you will win. Each prize is a variant of spinning the reels a number of times or a nudge win.

Nudges are important in these types of games and give the player the opportunity to single reels down to try and collect numbers or make winning combinations. They are awarded randomly and can be repeated or held over to them next spin.

Holds are also randomly awarded and let the player freeze one to three reels in the hope of spinning the remaining reels and creating a win.

The Shifta will rearrange the reels into a guaranteed win after any on-spinning win.

Keep an eye out for hints on the screen above the reels, it will sometimes tell you to hold a certain reel which you should do for a certain win.

If you win the Nudge Mania feature during the main feature, it’s worth gambling the nudges because it’s quite easy to win and increase that number.

We like the type of slot and we like this one in particular; it’s not so complicated that it puts you off but it has enough features to make you want to keep playing.