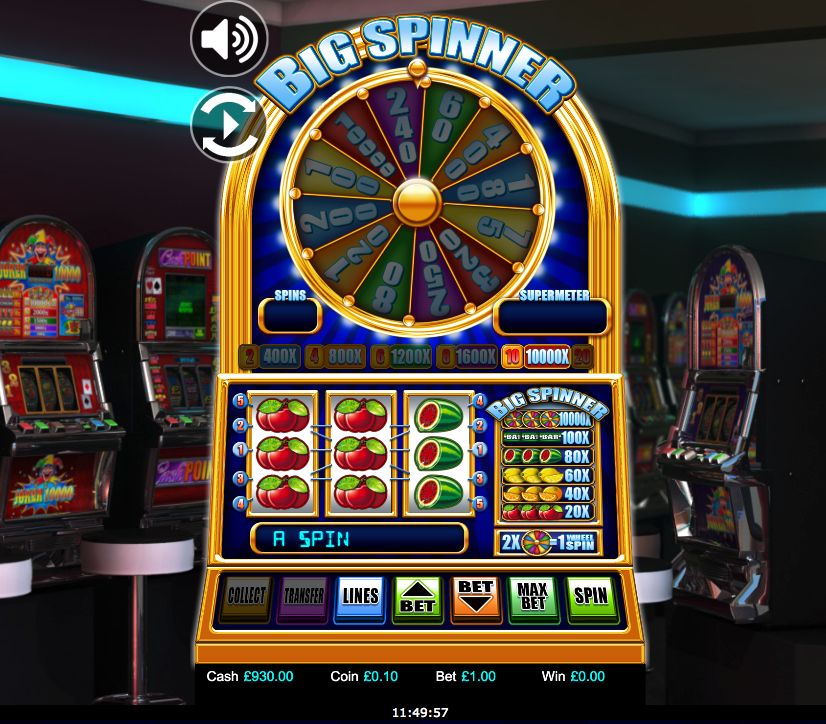 If you’re feeling a bit ‘old school’ and you fancy checking out an online slot which has three reels and plays like a fruit machine then maybe fire up Big Spinner for a few minutes; it’s a game developed by betdigital so read on to find out how it all works.

Big Spinner is a three reel slot with three rows and up to five paylines; we’re playing on a realistic-looking machine in a room full of other casino games developed by betdigital. Above the reels is the large wheel which gets involved with every win.

The symbols are mostly fruity and include cherries, oranges, lemons and watermelons but there are also green bars.

There are no wilds in Big Spinner but the multicoloured wheels act as bonus symbols.

Each win in the base game can be collected or gambled to try and double its value; if you fancy a punt just click the red or black buttons which are flashing below the reels. You can successfully gamble up to a maximum win of 10000 coins but of course you can lose it all also.

If you are playing with all five payline active, any win in the base game can be transferred to the Supermeter above; here you can play spins which cost 20 coins each for bigger prizes. These wins can’t gambled.

There are two ways of triggering the Bonus Wheel which will award a multiplier between 60x and 10000x your stake:

Big Spinner is a slot which squeezes plenty of action and features into a its three reels as well as an autoplay feature seldom seen in a three reel game; increasing the payline you use increases the RTP from a paltry 02.00% up to a generous 97.00%.