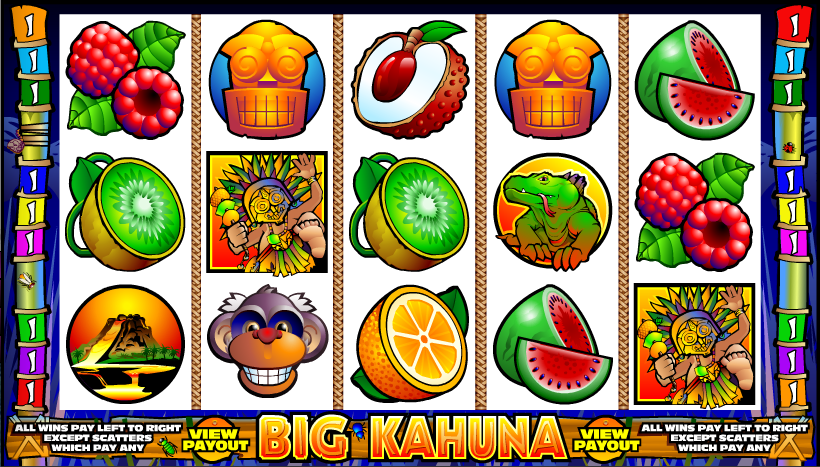 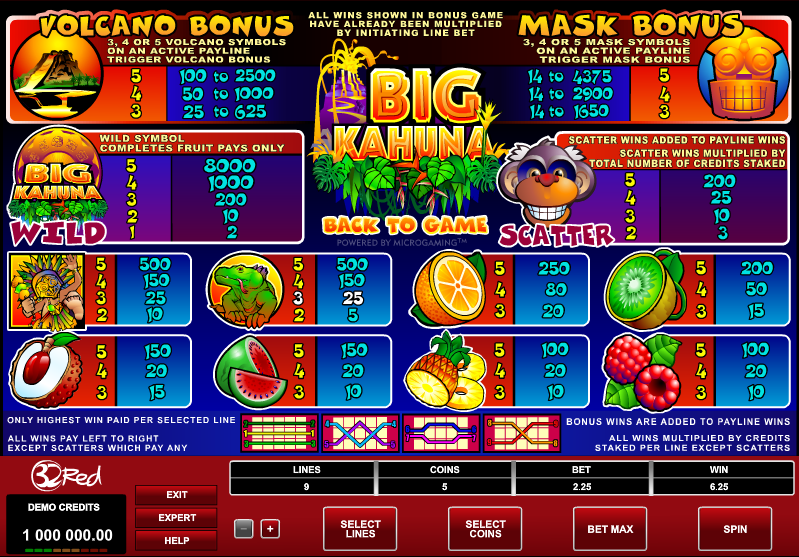 We’re off to the South Pacific to check out this colourful online slot; it’s called Big Kahuna, it’s developed by Microgaming and it’s the predecessor of the excellent Big Kahuna Snakes and Ladders which we have reviewed elsewhere on this site. The game may be a little dated now but the graphics and gameplay have stood the test of time so read on to find out more.

Big Kahuna is a five reel slot with just nine paylines and the them is one of a traditional Pacific Island nation. The big, bold symbols fill the screen entirely and they include various nicely-drawn fruit – raspberries, pineapples, melons, jackfruit, kiwifruit and oranges – as well as a Komodo Dragon and a masked statue.

This is a fairly brief bonus which one feels could have been extended a little bit – if you can land three, four of five of the volcano symbols on an active payline you will be taken to a new screen.

Here you must sacrifice a piece of fruit to the statue by dropping it in the volcano. Each of the pieces of fruit is worth a different prize amount so it’s pot luck which one you pick.

This is slightly more involved min-game and to trigger it you need to land three, four or five of the Tiki mask symbols on an active payline.

You will now be taken to a screen displaying ten Tiki masks and all you have to do is pick them one by one, revealing a prize behind each until you find the one showing ‘Collect’, at which point the game is over.

Those features need to be activated by symbols on an active payline so play as many payline as possible to give yourself the best chance of triggering the bonus games.

This is a really nice-looking game but one which lacks a bit of creativity, particularly in the brevity of the bonus features. Still, it makes a nice prequel to it’s successor.