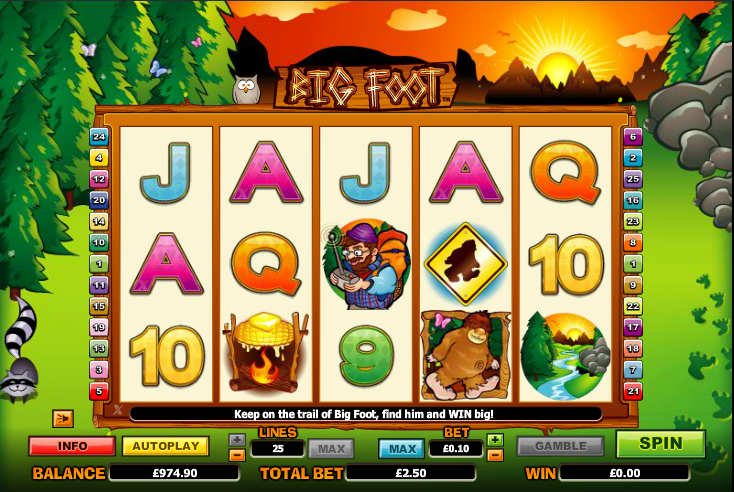 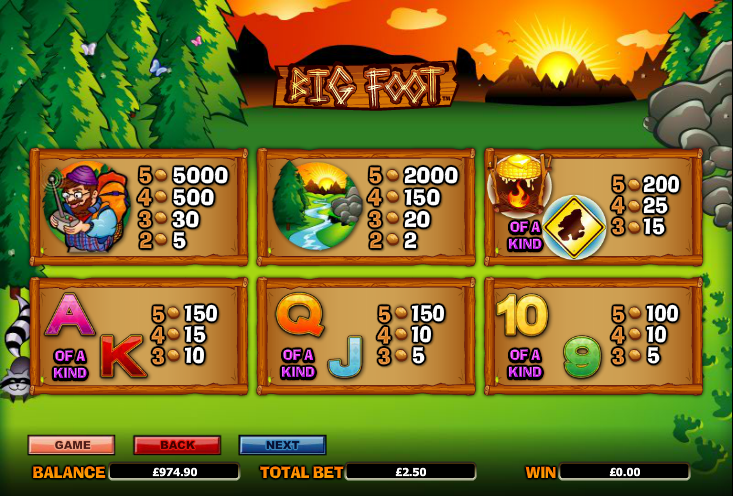 A lack of any real evidence is no barrier to the many people who would like to believe that a creature such as Big Foot exists; grainy photos of this hairy sasquatch are all the proof we have but at least there’s now an online slot machine to play – it’s called Big Foot, it’s developed by NextGen Gaming and you can read all about it below.

Big Foot is a five reel slot with three rows and up to twenty five paylines; we’re out in the wilderness here and the wooden reels spin against a backdrop of a sun setting over tress, meadows and rocky hillsides.

There are four theme-related symbols including our intrepid hunter, a scenic view, a camp fire and a Big Foot road sign; lower values are the standard 9, 10, J, Q, K and A.

Big Foot himself is the wild symbol, he appears only on reels two, three and four and he’ll replace all others except the footprint scatter icon.

Trigger this by landing three Big Foot wilds anywhere on reels two, three and four on the same spin. You are now shown a screen displaying pairs of eyes in a forest scene so just click three of them for prizes – finding Big Foot is worth a larger prize.

Any win can be gambled by clicking the ‘Gamble’ button below the reels; you can now try to double or quadruple that win by guessing the colour or suit of the next card drawn.

Big Foot is a typical Nextgen slot with some simple but amusing graphics, steady gameplay and a couple of decent bonus features. It comes with an RTP of 95.01%.