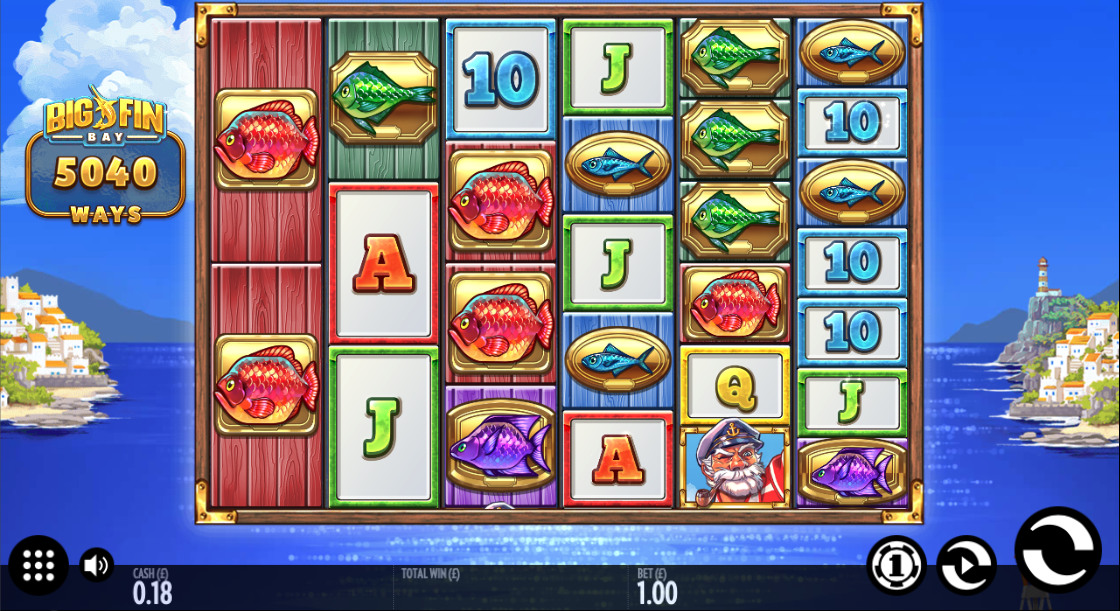 We don’t know exactly where Big Fin Bay is but it looks very scenic and it’s also the setting for this online slot from Thunderkick which tells the tale of an epic search for the golden marlin which swims beneath the ocean waves; Big Fin Bay also comes with free spins, expanding wilds, mystery wilds and up to 117,649 ways to win in the feature.

Big Win Bay is a six reel slot with 5040 ‘pay ways’ to win in the base game; the sparkling seas which are the home to the golden marlin sit between hillsides dotted with whitewashed houses while a fishing boat chugs to and fro.

The high value symbols include the captain and four fish of varying colours displayed on golden plaques; 9, 10, J, Q, K and A make up the lower values. The golden marlin is wild and the anchor is the scatter symbol.

Any wild which helps out with a win will expand to cover its whole reel; the mystery wild feature will see up to three reels turn completely wild in the base games.

This is triggered by landing at least three anchor scatter symbols anywhere in view and each reel which contains an anchor will award a maximum of six spins meaning that thirty six are available for the luckier players.

Any wild symbols which land during this round will expand to fill their reels and also award one instant respin while locked in position; in addition the number of rows on that reel will increase by one up to a maximum of seven, meaning a potential 117,649 pay ways. Each time a reel reaches seven rows three extra spins are awarded.

Big Fin Bay is a cheerful trip to visit this fishing community but it’s also a slot with some clever features, especially the wild respins in the free spins round; an above-average RTP of 96.14% rounds things off nicely.

Big Fin Bay is an ocean-themed video slot from Thunderkick with six reels, up to seven rows and 5040 pay ways in the base game.

The Return To Player percentage for Big Fin Bay is 96.14%.

How To Win On Big Fin Bay?

Where can I play Big Fin Bay?