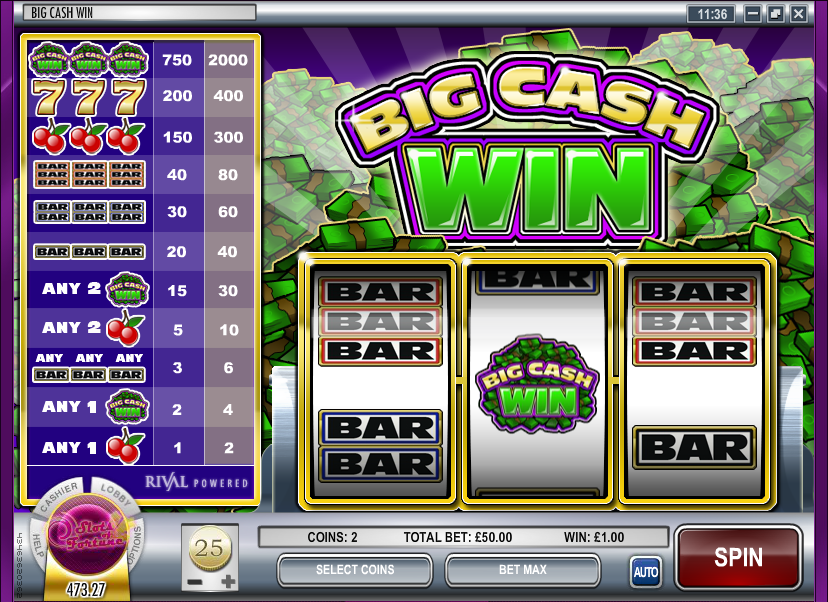 Some online slots make absolutely no bones about what’s going on behind those reels and when you play a game called Big Cash Win you pretty much know what the theme is going to be. Piles of money are are of course one of the reasons we spend our time spinning the reels but this Rival Gaming release is brave enough to remove any pretence about what we really want.

Big Cash Win is a pretty simple three reel and one payline game which is filed under the ‘Classic Slot’ genre. Those three big reels sit to the right of the screen in front of a huge mountain of stacks of banknotes, just waiting to be reunited with their rightful owner which is of course you. To the left of the reels is the paytable which displays your potential winnings.

The first thing to do is select your stake size; use the ‘+’ and ‘-‘ signs underneath the coin to choose the bet level. You can now opt to play with a one or two coin level which will double the stake and double the winnings. The one exception to that is that three Big Cash Win logos will offer 2000x your stake with two coins and just 700x with one coin.

For that reason there’s an extra incentive to go for the two coin level rather than just one. You never know – you might strike lucky and you don;t want to miss out on that big payday.

There are no surprises here and certainly no bonus features but for fans of classic slots this is about as classic as you can get. It does what it says on the tin and there’s nothing wrong with that.