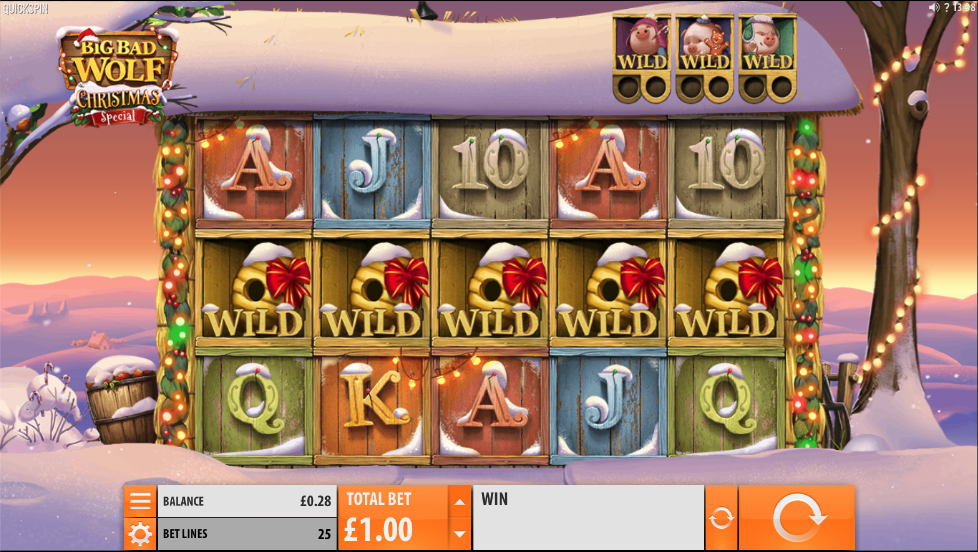 Big Bad Wolf is one of Quickspin Gaming’s best known online slot machines and it’s popularity means that it’s now returned in a Christmas Special version with a festive makeover; from £0.25 per spin players can win features and an enhanced free spins round.

Big Bad Wolf Christmas special is a five reel slot with three rows and twenty five fixed paylines; the sunny rural background of the original game is replaced by a snow-covered vista and bare trees lit by strings of lights.

The four high value symbols are still the three little pigs and the soft toy (which now has an elves hat) while the lower values are snow-capped 10, J, Q, K and A. The beehive is wild and the wolf and moon are bonus symbols.

To the top right of the reels you will notice three pigs with two circles below each one; each second win fills in one circle with the following results:

If you can land three or more wolf scatter symbols you’ll be awarded ten free spins; you’ll begin by watching a nice animation of the wolf blowing down the house and then the free spins will begin.  During this phase if you can land three Moon symbols, the Blowing Down The House feature will kick in and the wolf will blow down the wood house and give you two more spins – six moons will blow down the brick house, giving another two spins and a 2x multiplier on more wins.

Big Bad Wolf Christmas Special is almost identical to the original but those Christmassy touches make it worth a few spins, especially at the right time of year. It also has a refreshingly high RTP of 93.74%.