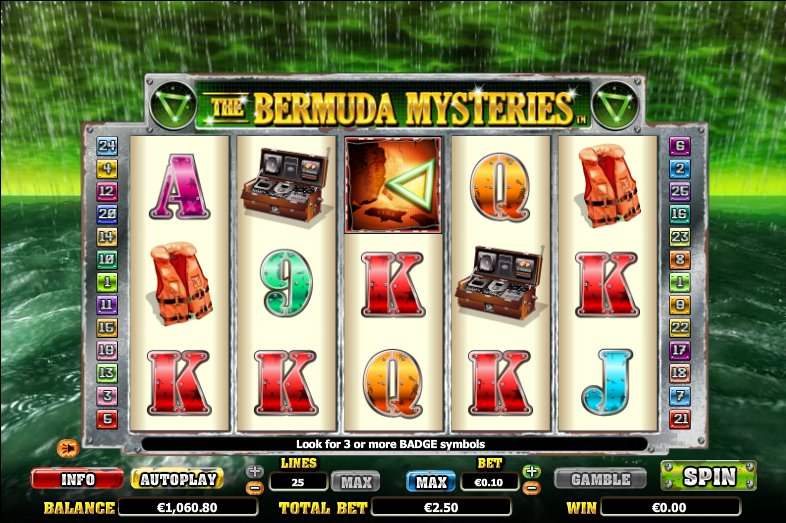 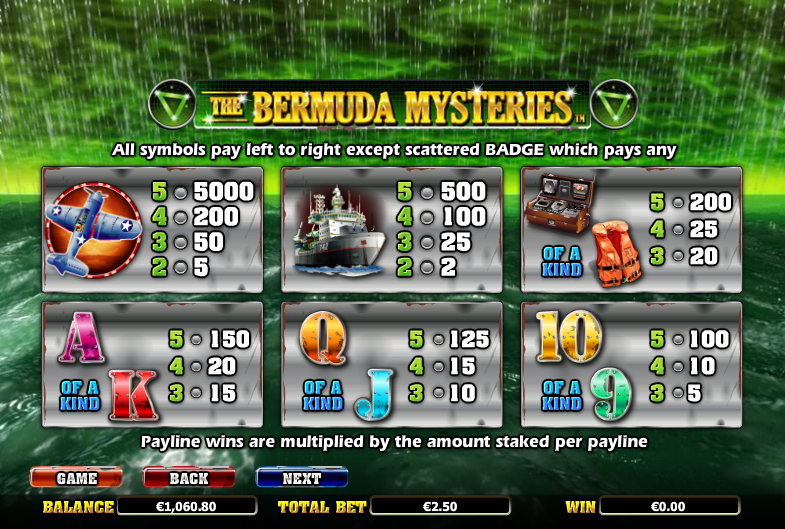 Off the west coast of Florida is a vaguely triangular area of ocean known by conspiracy theorists as the Bermuda Triangle; despite all evidence to the contrary there is a school of thought which suggests that there is something spookily dangerous here which causes ships and planes to disappear. The Bermuda Mysteries is an online slot from Nextgen Gaming which propagates this myth a little further.

The Bermuda Mysteries plays out over five reels, three rows and up to twenty five paylines;  the backdrop to the metallics reels is a greenish, rain-lashed view of this mysterious place.

High value symbols include a lifejacket, a ship’s radio, a ship and a WW2 fighter plane; lower values are the usual 9, 10, J, Q, K and A.

The pilot symbol is wild and appears only on reels two, three and four; there are two scatter symbols – the golden badge and the map – which activate separate bonus games.

Landing three or more of the golden badge symbols anywhere view will reward you with twelve free spins. A green radar symbol is added to reel five and each time it lands the multiplier for the round will be increased by 1x.

You can’t re-trigger more spins from within the feature but you can activate the Rescue Bonus.

This mini-game is triggered from within the base game or the free spins by landing three or more map symbols anywhere in view.

You will now be taken to a radar station and all you have to do is pick from the locations identified on the map. Discovering a downed plane or wrecked ship will win you prizes of increasing sizes but finding a Flying Saucer, a Broken Compass, a Freak Wave, a Whirlpool or a Wormhole will end the game.

Any win can be gambled by clicking the ‘Gamble’ button below the reels; you can now try and double/quadruple that win by guessing the colour or suit of the next card drawn. There’s a limit of five correct guesses.

Dodge that gamble feature if you want to extend you playing time; trying to guess suits and colours in return for bigger prizes is the quick way to defeat.

The Bermuda Mysteries is a pretty atmospheric game with a couple of features to keep players entertained. The Rescue Bonus is a creative game in tune with the theme.