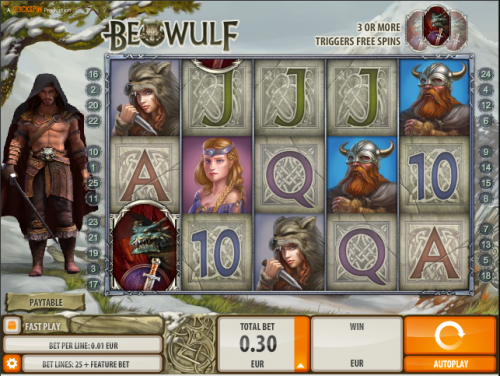 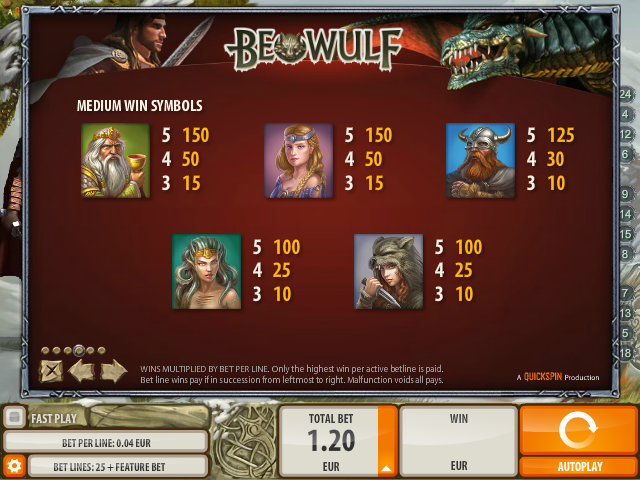 If the first time you became aware of the character of Beowulf was through the 2007 computer animated film of the same name then that’s quite understandable; Beowulf was always a relatively obscure figure from an epic old English poem which dates back at least a thousand years.  It tells the tale of how Beowulf travels to Scandinavia to defeat Grendel the monster and his mother.  Quickspin have now released an online slot based on this epic tale and it’s packed with bonus features.

When you load up the game you’ll see Beowulf himself standing to the left of the five reels and twenty five paylines; behind our hero is a snowy, mountainous environment but he’s so tough all he needs is a long cloak to keep warm.

The low value symbols are 9, 10, J, Q, K and A set on a Celtic-decorated tile; higher value symbols are various characters from the saga and we can speculate that the most valuable is King Hrodgar, the leader who originally asks for protection against Grendel.  There’s a wild symbol represented by a horn, Grendel’s mother (a dragon) is the scatter and several other symbols which only appear as part of the bonus features so we’ll explain those in more detail below.

This is a randomly-occuring feature in the basic game and the first sign that it’s on it’s way is when the sky above the reels turns red; Grendel will then appear on a number of places on reel five which spins.  When it stops, Beowulf steps forwards and slashes away at the monster, revealing a number of free spins.  At the same time stacked wilds appear on the reels and remain frozen for the duration of the spins.

Landing three of Grendel’s mother scatter symbols anywhere on the reels will reward you with entry into this bonus game; you being with an indeterminate number of spins but a fight is taking place between Beowulf and Grendel’s mother to decide when the spins stop.

This is how it works:

When a sword wild symbol appears on the reels it’s stays there and  one health is deducted from the dragon’s health bar; when a dragon wild appears the sword is removed and one health is removed from Beowulf’s bar.

The fight is over when either Beowulf or the dragon has no health left but if Beowulf wins you’ll get an extra free spins.

This is just an excellent game with a suitably dramatic soundtrack to accompany the action; Quickspin have really got to grips with the story of Beowulf and the graphics and animations are fantastic.  Two innovative bonus games make this a slot to put on your list.